Reflections on Being Human – An Apology from the Front Lines

Reflections on Being Human - An Apology from the Front Lines 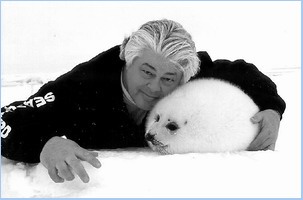 I do admit that after forty years of exposure to the slaughter of seals, that my heart has been sickened by the violence and slaughter that I have witnessed.

And over the years, I have seen this horror repeated over and over again. I have witnessed the mass slaughter of pilot whales in the Faeroe Islands, the massacre of the dolphins in Japan, the finning and torture of hundreds of sharks, the struggles of sea-turtles dying on longlines, the screams of disemboweled elephants in East Africa - a litany of horror stories and so much blood and suffering.

I admit it does something to a person. It erodes innocence and darkens the heart, and it arouses a deep and dangerous anger that I confess is difficult to keep on a leash.

But I have controlled my demons well, I think. I have never inflicted an injury to another human being and although I lash out at humanity with sharp words, I am only revealing a deep desire to restore some ecological and compassionate sanity to this tortured world.

So many are so busy being entertained that they cannot see the world being destroyed before their very eyes.

It is my compassion for life and my passion for this planet that keeps me in this struggle and keeps me on the front lines where I must confront the killers face to face, where I hear their taunts, sometimes feel their fists or weapons and must always weather their threats and their hate.

It is true that as a Canadian I am no fan of Canada and as a human being I am no great fan of humanity. But as an Earthling, I am someone who deeply and most affectionately loves life on this Earth and especially in her oceans.

I regret that this love sometimes gives birth to a deep skeptical pessimism about my fellow man and woman, but I know where it originates from and I would like to share it as a way of explaining why I do what I do and why I am who I am.

It goes back to June of 1975 just moments after failing to block a Russian harpoon that had mortally wounded a great sperm whale in the Pacific Ocean.

I watched this magnificent giant struggle on the surface of the ocean with a gaping wound in his head from an exploded Soviet harpoon. I saw his blood flow into the sea and I heard his scream of agony and then I saw one of his eyes make contact with mine.

The next moment he dove and disappeared beneath the surface but a trail of blood and bubbles moving rapidly towards me betrayed his intentions and his huge head burst through from the deep and his body rose high and at an angle above where I sat in a small inflatable boat. Within moments this great beast would fall forward and crush me but he stopped his ascent and I found myself looking into an eye the size of my fist and what I saw in that eye changed my life forever.

Because I saw and I felt understanding. That whale knew that I had attempted to protect it and with a great effort he fell back and I saw his long body slide beneath the waves and his eye disappear beneath the black surface of the sea.

And then I was alone.

And I found myself asking why? Why were the Russians killing these whales? I knew the practical answer. They were being killed for the high quality, high heat-resistant Spermaceti oil to be used in machinery. And one piece of machinery that this oil was used in was in the workings of an Intercontinental Ballistic Missile and the realization came to me that we were destroying these beautiful and intelligent sentient creatures for the purpose of manufacturing a weapon designed for the mass extermination of humanity.

And that was when I became enlightened to the simple truth that humanity was insane. I scoured the history books for evidence to the contrary but all that I could find was a record of war, deceit, selfishness, and wholesale destruction upon nature and upon each other.

But in my heart there is still a spark of hope for our salvation but I see this salvation only in our willful renunciation of the terrible violence we inflict upon other species and ourselves.

And that is why I fight to end these horrors like the seal hunt, whaling, aerial wolf killings, the clear-cutting of forests, and the mass extermination of the fishes. I do so to cleanse myself of my anger at humanity and thus myself.

So I do apologize for any offense I may cause. I often offend myself for I am in my very own eyes - the enemy.

For many years ago out on that blood-stained ocean, I met the dark side of man. I also looked into the eye of another species and saw both mercy and courage.

As a result, I today serve the whales, the dolphins, the seals, the turtles, the sea-birds, and the fishes, and I do it with incredible restrain and a commitment to non-violence.

But I confess to sometime unleashing my anger in words and by the means of confrontation, intervention, and obstruction.

So please forgive me both friends and supporters if I am not always gentle and meek in my regard for the butchers.