Just when we were thinking it was becoming safe for sharks to be in Australian waters, the Queensland government in an incredible display of ecological insensitivity has proposed a shark fin fishery in the Great Barrier Reef World Heritage Area and in marine parks in Queensland waters.

The practice of shark finning is the most nonsensical, ecologically destructive, and unethical fishery in the world.

Australia is supposed to be one of the most ecologically aware and proactive nations in the world. What are Queensland politicians thinking?

Over 90% of the world's sharks have already been eradicated from our oceans and this bodes ill for the ecological integrity of marine eco-systems.

Queensland wants to issue licenses to take an unlimited number of sharks in what amounts to an extermination policy against these essential and magnificent creatures.

This announcement has come just as Rob Stewart's award winning film Sharkwater opens in Australia. This film which features the Sea Shepherd efforts to stop shark finning is raising awareness of the plight of sharks worldwide.

Recently Rob Stewart met and spoke with Andrew McNamara, the Queensland Minister for Sustainability and Climate Change. It was a promising sign that Mr. McNamara attended the Brisbane premiere of Sharkwater.

The Sea Shepherd Conservation Society has been defending sharks in the Galapagos, Ecuador, Cocos Island, Costa Rica and Malpelo Island off Colombia. The last place we thought we would need to intervene to protect sharks would be Australia.

Recently the media has been sensationalizing shark attacks despite the fact that on average less than 5 people die each year as a result of interactions with sharks whereas ostriches are responsible for killing an average of one hundred people a year making the ostrich twenty times more dangerous than the shark.

Yet as our media screams out that that humans are victims, we slaughter between 70 and 100 million sharks each year and we are presently waging a war of extermination on an apex marine predator that has existed on this planet for 450 million years.

Is a bowl of sharkfin soup worth the irreparable ecological damage we are doing to the world's oceans?

The Sea Shepherd Conservation Society is urging all Australians who care about the future of our seas to e-mail Anna Bligh MP Premier of Queensland ThePremier@premiers.qld.gov.au to demand that this legislation be quashed.

Please click on the following link to sign the petition to oppose the new shark fishing in the Great Barrier Reef:   http://www.sharksavers.org/content/view/260/36/

And we urge all Australians to go see the movie Sharkwater.  It is the first film to tell the truth about sharks and it is a film that is going a long way towards protecting this wondrous and unique family of animals. 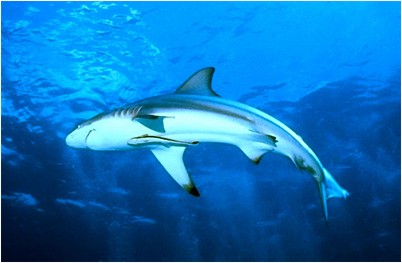