Canada's Consul General's Office: Sealing has been a source of livelihood for small, coastal communities in Canada for hundreds of years and the vast majority of sealers are responsible individuals with a deep respect for the sea and its resources. Their livelihood is not an easy one.

Captain Paul Watson: Sealing is no longer a source of livelihood for east coast Canadian fishing villages and has not been for some time. The hunt is subsidized, this means the Canadian taxpayer is paying for the slaughter of the seals, as a make-work project for fishermen put out of work because of Canadian government mismanagement of the fishing industry. The government has been scapegoating the seals, trying to convince the fishermen to kill the seals to bring back the cod and appeasing them by paying them to kill the seals.

There is no scientific validation for this position. Even Canadian government scientists have advised the government that there is no link between seal populations and the decline of the cod. In fact, the reverse is true. Harp seals eat fish that prey upon cod and it is these predatory fish that factor in cod recovery much more than seals. In fact, by reducing harp seal numbers, there is a corresponding increase in predatory fish numbers leading to an even further decrease in cod numbers.

The statement that the "majority of the sealers are responsible and have a deep respect for resources from the sea" is also not true. Every single commercial fishery in Eastern Canada has been mismanaged and over exploited. There is no evidence of this responsibility. Last year the harp seal quota was 275,000. The official kill was 310,000. There were no penalties for this overkill and the government responded by increasing the kill quota to 350,000 for this year and the next two years.

There are no markets for these seals and the seal hunt does not contribute anything to the economy of Canada. In fact, it is a negative activity because it is carried out at the expense of the taxpayer.

As to the statement that "the fishermen of Newfoundland do not have an easy livelihood," this is nonsense. Newfoundland statistically has the highest consumption of tobacco and alcohol products. Their standard of living is comparable to other areas of rural Canada. They have government provided health care, free access to education, they receive the highest pay-outs of unemployment insurance to compensate for the collapse of the fishing industry and they are receiving job retraining programs if they wish to do so. 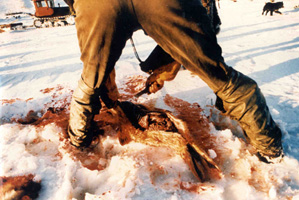 Canada's Consul General's Office: I would like to reassure you that the Department of Fisheries and Oceans Canada (DFO) is making every effort to ensure that seals are harvested as quickly, effectively, and humanely as possible. Seals are a plentiful natural resource that is harvested responsibly like many other species.

The Canadian government's policy on seals and sealing is consistent with its policies on the management of other fishery resources. The use of this resource is permitted only within the limits of sound conservation principles, taking into account the seal's role in the ecosystem.

Captain Paul Watson: This statement is ludicrous. The Canadian government's Department of Fisheries and Oceans (DFO) has mismanaged every fishery under its authority. There has been little evidence of responsibility. DFO incompetence has resulted in the collapse of the cod fishery on the east coast and the collapse of the salmon fishery on the west coast. If the government's policy on seals and sealing is consistent with it's management of other "fisheries", then the seals are in trouble indeed.

The government has ignored every scientific study that disagrees with it's political position. The "scientific" justifications being used are non-peer reviewed "studies" by government employed biostitutes. The world's leading authority on harp seals is Dr. David Lavigne and he has advised against this hunt consistently for over two decades.

Canada's Consul General's Office: Although the manner in which seals are killed may appear cruel, it is in fact quick and efficient. The death of any living creature cannot be made visually or aesthetically appealing. Harvesting methods used for the seal hunt have been studied and found acceptable by the Royal Commission on Seals and Sealing and independent veterinarians.

Captain Paul Watson: I have seen the seal hunt and it is anything but humane. I have observed this slaughter since 1976. I have seen seals kicked in the face. I have seen them skinned alive. I have seen them beaten to death. I have seen their eyes poked out. Michael Dyer, a sealer, in his book, Over the Side Mickey, writes and brags about how they have had fun torturing seals and playing hockey with their heads as pucks. The seal hunt is extremely cruel and for this reason the government passed laws in the seventies to outlaw anybody from witnessing, filming or photographing the hunt. Obviously, there is something to hide. Every veterinarian that I have taken to the seal hunt has been appalled, including Dr. Richard Jordan of the Royal Society for the Prevention of Cruelty to Animals.

Canada's Consul General's Office: The regulations governing the seal harvest are supported by the sealing industry and are strictly enforced by DFO. Failure to observe catch requirements, license conditions, and humane harvesting practices are penalized.

The consequences of such illegal actions could include court-imposed fines of up to $100,000 and the forfeiting of catches, gear boats and licenses. DFO sets a total allowable catch (TAC) level that will ensure the health and abundance of seal herds. The levels are based on market conditions, as well as scientific assessment of the status of the stock. The actual catch fluctuates from year to year according to environmental factors and economic conditions. Continue Story