Candace Calloway Whiting of the Seattle P-I wrote in a recent article, “the bottom line is that developers, farmers, and commercial fisheries feel that their rights should supersede the welfare of a fragile population of orcas – and it is unfathomable that NOAA is actually taking the petition seriously.” They do not even argue that the Puget Sound orcas are not under threat or endangered. They use the old NOAA argument that they are not a separate population. In other words it doesn’t matter if the Puget Sound orcas get wiped out, there are other similar orcas elsewhere.

NOAA initially decided not to list the orcas in 2002 after determining that the southern resident killer whales of Puget Sound, in J, K and L pods, were not a distinct population. A U.S. District Court judge in 2003 ruled there was enough uncertainty in the science to give the matter more study. Research showed that they were, in fact, genetically unique, with a unique dialect and were one of the only orca populations to feed extensively on salmon, resulting in a listing as threatened in 2004 and endangered in 2005.

The listing resulted in 2,560 square miles of Puget Sound being protected and required whale-watching vessels to keep a farther distance from the whales. Even with these measures the southern resident population remains at only 86 animals.

If the animals were to be taken off the endangered species list, designation of critical habitat for them would disappear.

NOAA Fisheries has accepted the petition because "the petition presents new information from scientific journal articles about killer whale genetics, addressing issues such as how closely related this small population is to other populations, and meets NOAA Fisheries’ standard for accepting a petition to review." NOAA has to finish this status review of the southern resident population of orcas by August 2014 to determine if listing is still warranted.

You may recall that NOAA is the government organization that was obstructing independent investigations into the Deepwater Horizon oil spill in the Gulf, that granted permission to the states of Oregon and Washington to cull sea lions at the Bonneville dam for eating salmon, and is currently seriously considering the importation of 18 wild caught Belugas by the Georgia Aquarium.

The petition to delist was filed on the farmers' behalf by the Pacific Legal Foundation based in Sacramento. A nonprofit in name, that has built a $25 million business by fighting endangered species listings and environmental restrictions. On their website they announce support for the state of Alaska’s attempt to eliminate the endangered species status of the Cook Inlet Belugas because protecting these animals could have major impacts on shipping, fishing, resource development, public infrastructure projects, and national defense.

With greedy farmers after self-interest, an anti-regulation firm in league with big business, a forever-failing government institution, and science without heart or common sense against them, these orcas are in trouble.

According to Brenda Cummings, of the Center for Biological Diversity, the nonprofit that filed the original petition to list the southern resident orca on the ESA, “this population is unique because it does not breed with other groups, is a “resident” population that feeds on fish, and is significant as a top predator in the Puget Sound ecosystem.” This Southern Resident community of the Pacific Northwest lost 48 of its members to captivity in the 1960s and 70s, most of them now long dead. Lolita, originally known as Tokitae, is a survivor of the Penn Cove capture in August 1970 in which five of her family members died. She is now the oldest captive orca. When she is finally delivered from slavery and released back into the ocean, her family must be there waiting for her, a protected family! We owe them that much.

There are two petitions circulating:

Keep the Puget Sound Orca on the Endangered Species List 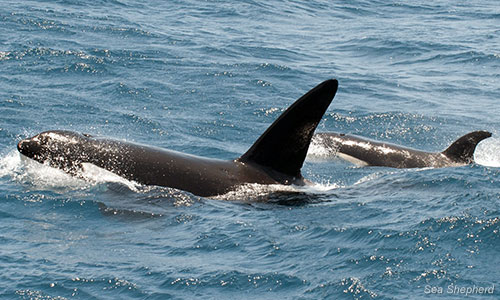