The Canadian National newspaper the National Post ran an editorial on June 9th by Mary Richardson, a prominent Canadian Veterinarian.

This is her opinion, published in the National Post of the documentation of the Canadian seal slaughter this year:

As a Canadian expert in humane slaughter, and past chair of both the Animal Welfare Committee of the Ontario Veterinary Medical Association and the Animal Care Review Board with the Solicitor General of Ontario, I was asked by the HSUS to review their 2005 seal hunt footage.

Without a doubt, what I witnessed was clear evidence of unacceptable and illegal cruelty to animals.

Among other things, the videos show seals that have been battered with a club or hakapik, and then left, or hooked and dragged, or skinned while still alive. The tapes show many of the wounded seals are still conscious and struggling for prolonged periods, as evidenced by their voluntary movements (crawling, crying out, laboured breathing, rolling, etc). In some scenes, seals with terrible head injuries are left in stockpiles of dead and dying animals, choking on their own blood and suffering tremendous pain - some for as long as 90 minutes. In others, sealers cut open seals that are clearly still conscious.

These are not humane ways to die as defined by the Criminal Code of Canada. When clubbing seals, sealers are legally required to kill each animal and then ensure that it is in fact dead, before moving on to kill the next one. But the vast majority of times, the sealers do not take the time to do this, which results in horrendous pain and suffering for
the wounded animals.

Department of Fisheries and Oceans (DFO) spokespeople often attempt to dismiss allegations of cruelty at the hunt, saying freshly killed seals often exhibit a "swim reflex." But the hours of footage I have reviewed show clear evidence of seals showing conscious responses to pain.

In recent years, licensed observers have submitted video evidence of more than 660 apparent violations of the Marine Mammal Regulations - including seals being skinned alive - to the DFO. I have reviewed much of this footage, and I am appalled that the DFO has refused to lay a single charge in response.

The cruelty documented by the HSUS this year is not the extreme - it is the routine of the commercial seal hunt.

Canadian law prohibits this kind of cruelty at animal shelters, slaughterhouses and veterinary hospitals, indeed wherever animals are killed at the hands of humans. Canadians believe if an animal must be killed, the death should be quick and humane. But as the evidence shows, this is not what happens in the commercial seal hunt.

Given the size of the animal and the weapons the men are allowed to use, a quick death cannot be guaranteed. Imagine taking your dog in to be euthanized and finding out that the veterinarian was going to use a bat to do the job. Would that be acceptable to you? 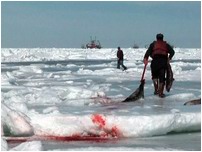 There is also a time constraint. The sealers are paid per seal they kill, not by the hour. They compete against each other to fill quotas, making it necessary for them to collect huge numbers of animals in a very short time. This means sealers rarely take the time to ensure each animal is dead before moving on to the next one.

Now imagine the veterinarian, not just with your dog, but a field full of dogs. He has only one bat and a couple of minutes to do the job.

And finally, the conditions for the seal hunt are precarious. The ice floes shift and break, never ensuring a firm footing. So now put the vet, the bat and all the dogs on fun-house floorboards. In these conditions, can your dog die peacefully?

The seal hunt is inherently inhumane. If we are to respect existing animal-cruelty laws, the Canadian government must stop the seal hunt. Concerned Canadians and citizens around the world should contact their government representatives and demand immediate action. You can start by contacting the Canadian Minister of  Fisheries and Oceans Geoff Regan at:
E-mail: Min@dfo-mpo.gc.ca
Tel: (613) 992-3474