Since the 12th of July, crew of the Sea Shepherd Conservation Society vessel Farley Mowat has been monitoring and patrolling several authorized landing points during the 2007 sea cucumber fishing season at the request of the Galapagos National Park.

All sea cucumbers landed at Isla Santa Cruz must be inspected, counted, and measured. Three species of sea cucumbers exist in the Galapagos but only one species - Isostichopus fuscus - can be extracted and put into the commercial market. However, there is a size limit restriction of 20 centimeters in length required for all legal sea cucumbers brought ashore.

A quota of two million sea cucumbers has been set for the 50-day-long commercial fishing season.

Working alongside Park Rangers, the SSCS crew have provided invaluable support for the enforcement of the Galapagos National Park rules and regulations by measuring and counting landed sea cucumbers. Undersized animals are removed and brought back to sea. Recently, the amount of animals rejected as too small has increased from three percent to eight percent of the total catch. On an average night, 4,655 sea cucmbers are landed of which at least one in twenty is illegal.

Several confrontations occurred due to effective controls by the Sea Shepherd crew and the presence of Sea Shepherd has been instrumental to ensure undersized animals are not shipped off for sale at the cost of the fragile Galapagos marine environment.  "We are also, in essence, securing the livelihoods of all responsible fishermen in the Galapagos Islands. The removal of undersized and juvenile sea cucumbers will not only impact the marine ecosystem but also puts at risk the very same fisheries they depend on. It would be irresponsible for us and them to deny that basic right for future generations of fishermen,"  comments Sean O'Hearn-Gimenez, Sea Shepherd director for Galapagos and Ecuador.

Sea Shepherd will continue to maintain a presence in the 2007 Sea Cucumber Fishery to insure there is no negative impact from unruly and irresponsible fisherman. Our patrol vessel is currently in position to monitor the sea cucumber divers and their vessels.

Fishermen landing sea cucumbers without the presence of a qualified Park Ranger inspector have been photographed. Video evidence will be handed over to the director of the Galapagos National Park.

Two weeks ago, 93,018 illegal sea cucumbers were seized by O'Hearn-Gimenez in cooperation with the Ecuadorian Environmental Police. 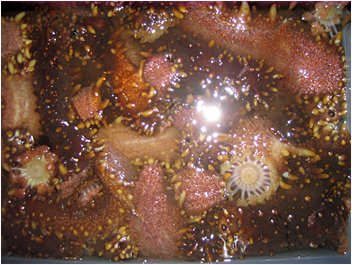 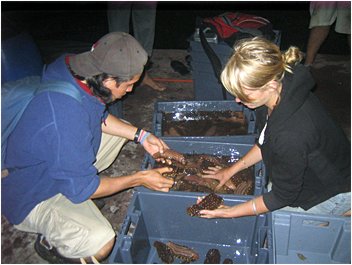