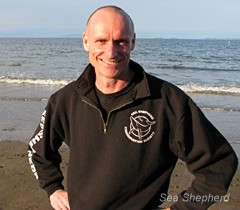 On the morning of Monday, 12 July 2010, at 10a.m., (NZ), Captain Pete Bethune will attend a press conference to discuss and answer questions about the events of the last 8 months that ultimately culminated in his return home from Japanese prison on Saturday.

The conference will be held at:

Captain Bethune was incarcerated for boarding the ship that had rammed and destroyed his ship, and the Sea Shepherd Conservation Society spent in excess of half a million U.S. dollars on Captain Bethunes defense in an attempt to mitigate his sentence.

Sea Shepherd views Captain Bethune as an inspiration in courage and dedication, and encourages the public and Sea Shepherd supporters to attend the conference to show their support of this hero returning from the whale wars.