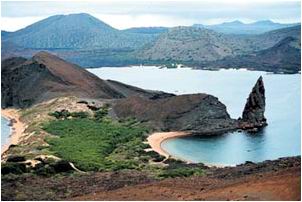 Once again the Galapagos are under assault. The growing population on the Galapagos is demanding greater access to the pristine marine eco-systems of the remote Galapagos Islands.

Galapagos fishermen are demanding that they be exempted from conservation regulations and that they be allowed to set long lines in the protected marine reserve to catch sharks. They are marching in the streets and violently assaulting National Park buildings and threatening rangers and staff.

"We have to go on strike because there's nothing to do, there's no economic activity," said Eduardo Abudeye, head of a fisherman's group on Isabela, complaining of the regulations in the archipelago 600 miles west of the mainland.

When the Galapagos National Park was created in 1959, the population was just over one thousand individuals spread over thirteen islands. The Ecuadorian government had decreed that 97.5% of the Galapagos would be protected with 2.5% set aside for human settlement. Since then the population has grown at an annual rate of 6%. By 1998 when the last census was taken the population of humans on the Galapagos stood at an approximate 15,000. Today there are over 20,000 inhabitants and most have migrated primarily from the Ecuadorian mainland. This does not include the 60,000 tourists that visit the islands each year.

This swelling population is being drawn to the islands by the fact that the remaining fish in the Pacific waters off South America have been over-fished leaving healthy fish populations only in protected national marine reserves. The growing tourist industry is also attracting people from the mainland to work in the hotel and restaurant boom on the islands.

The Galapagos Population is now doubling every eleven years and this promises 40,000 people on the islands by 2014.

At the same time, the Galapagos tortoise populations have fallen from an estimated 250,000 two hundred years ago to less than 15,000 today.

Fertility rates in the Galapagos are 2.55% and this is lower than the 3.4% on the Ecuadorian mainland. The primary contribution to Galapagos population growth is migration from the mainland and migration is considered to be the priority threat to the environment of the archipelago by the Galapagos residents themselves.

According to the National Park managers, conservation values have been difficult to communicate to the waves of migrants because they come to the islands seeking short-term economic objectives and conservation is considered a low priority.

At the same time there is a plan to Hawaiianize the islands and speculators are looking at building major hotel resorts and these expensive resorts will not be on the 2.5% set aside for human settlement.

Ironically the very unique nature of the Galapagos may be it's undoing. People are being drawn to the islands because of the varied and profoundly unique species found there.

Presently the greatest threat to these fascinating creatures like the giant tortoise, the marine iguanas, the blue-footed booby and the lava lizard is the rapidly increasing human occupation of the islands. By introducing alien species, over-exploiting indigenous species and destroying habitat, humanity is destroying the diversity of aboriginal life forms.

If humanity cannot protect and defend the World Heritage site of the Galapagos National Park and Marine Reserve, just what can we protect.

For as goes the Galapagos, so goes the world. Until we begin to address the problem of human population growth and human migration, we will never be able to protect wilderness and other species from drowning in a sea of humanity.

Captain Paul Watson is the President of the Sea Shepherd Conservation Society. Since December 2000, the Sea Shepherd Conservation Society has been working in partnership with the Galapagos National Park. The Society has provided a fast patrol vessel to assist in apprehending poachers. Presently the society is delivering supplies for the humane control of feral exotic animals on the islands.