We are at sea without a flag, in search of illegal whaling operations in hostile and remote waters at the bottom of the world. The Farley Mowat cleared Australian Customs in Hobart, Tasmania on December 29, 2006 only hours before the nation of Belize struck our flag. 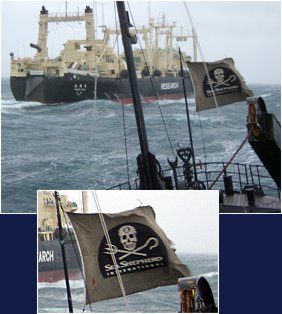 The Belize registry had only been issued ten days before on December 19, 2006. The registry was sought in Belize after Britain pulled the registry in early December the same day it was issued.

In October, the Farley Mowat registered under the Canadian flag since April 2002, had the registry suspended by Canada.

This is all apparently part of a strategy by Japan to use its economic muscle to lean on any nation that allows us to be registered under their flag. According to a credible legal source in Melbourne, the Farley Mowat, as an unregistered pirate vessel, may be interdicted at will by any naval vessel of any government, its crew arrested, and the ship sunk.

"This is incredible but not surprising," responded Captain Paul Watson, founder and president of Sea Shepherd. "The oceans are crawling with poachers flying flags of convenience. The Japanese and Norwegian registered whalers are illegally slaughtering whales in sanctuaries and killing endangered species, yet we are forced to have our flag struck for opposing these illegal activities."

The Farley Mowat will continue on to the Southern Oceans without a flag. "We have a mission and that mission is to save whales," said Captain Watson. "We will not surrender this ship to any navy and we will not comply with any order to cancel our campaign. If anyone wishes to stop us from protecting whales they will have to sink us." 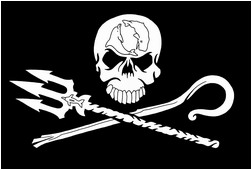 The captain and the crew of the Farley Mowat are not concerned about being called pirates. "It was not the British Navy that ended piracy in the Caribbean, it was Captain Henry Morgan who did that, and he was a pirate," said Captain Watson. "I am proud to add my name to the long list of honourable and noble pirates like Sir Francis Drake, John Paul Jones, and Jean LaFitte. To that end, we have created our own version of the Pretty Red or Joli Rouge. In place of two crossed swords, ours has the crossed shepherd's staff and Neptune's trident under a human skull engraved with the yin and yang-like symbols of a dolphin and a whale."

He continued, "If they want us to be pirates, than we will be damn pirates but we will not abandon the whales to the agony and misery of the harpoons without a fight. We are pirates of compassion in pursuit of pirates of profit."

Sea Shepherd has been opposing illegal whaling activities since 1977. This year, 2007, marks the 30th anniversary of Sea Shepherd high seas interventions against whalers and illegal fishing operations in the world's oceans.