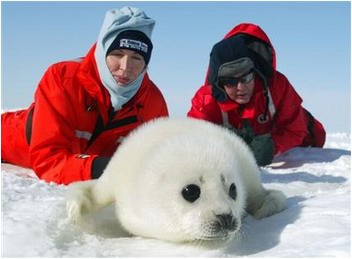 Sea Shepherd Conservation Society (SSCS) is pleased to see Sir Paul McCartney speaking up for the seals. In the past, Sea Shepherd Founder and President Captain Paul Watson has escorted Brigitte Bardot (1977), Martin Sheen (1995), and Richard Dean Anderson (2005) to the ice floes to bring attention to the slaughter of seals.

Brigitte Bardot and Martin Sheen are members of Sea Shepherd's Advisory Board, and Richard Dean Anderson (of MacGyver and StarGate SG-1 fame) is on the Sea Shepherd Board of Directors. All three of these prominent people have travelled to the Gulf of St. Lawrence to learn about the seals firsthand and continue to support SSCS's efforts to this day.

Sir Paul McCartney and his wife Heather have arrived in Charlottetown, Prince Edward Island, to make their opposition to the Canadian seal slaughter known to the world. And the world is paying attention. The McCartneys were guided to the seal nursery by the Humane Society of the United States' Rebecca Aldworth, one of the world's foremost experts on the harp seals and the campaign to oppose sealing. Sea Shepherd has had the pleasure of working in cooperation with Rebecca for nearly a decade. She is a Newfoundlander and one of the most passionate defenders of the seals in the world - she knows her sealing facts inside and out.

Ever since Paul and Heather McCartney had their pictures taken with these newborn pups, that picture have circled the globe and will appear in millions of magazines and newspapers in hundreds of countries. The government of Canada has lost this year's battle for the hearts and minds of humanity this year and their feeble attempts to defend the indefensible will be perceived as arrogantly insensitive.

Predictably, politicians in Ottawa and in Newfoundland are outraged. Fisheries Minister Loyola Hearn regurgitated the DFO propaganda about the seal hunt being "the most humane hunt in the world."  It is not. The government also attempted to link the hunt with the rights of Inuit people although no Inuit or other aboriginal people participate in the killing of seals in Eastern Canada. "The government arguments are thinner than the ice this year," said Watson.

The legendary musician faces the problem of limited and thin ice conditions in the Gulf. Global warming is threatening the seals as the ice floes are becoming more diminished each year. This year is the worst year on record for ice conditions.

The ice conditions are so bad that the government has not yet set a quota for the Gulf and they have not set an opening day for the slaughter. "It is of course highly irresponsible for the DFO to open a hunt without taking into account the potential negative impact of the diminished ice conditions," said Watson. "How can they set a quota on a population that will be savagely impacted by the lack of ice and when newborn mortality will be abnormally high? This department has demonstrated that they are the most incompetent, politically biased, and mismanaged bureaucracy in the Canadian government."

Everyone now knows Canada's bloody little secret, that the savage slaughter of the seal pups continues. Now we must focus our attention on building the political, media, and economic pressure to stop the killing. Sea Shepherd, along with many other organizations, is promoting a Boycott of Canadian Seafood to target the very people who slaughter the harp seals - the fishing industry. This industry runs the seal "hunt," which is a make-work project for off-season fishermen.