Anderson, the "U.S. Brigitte Bardot," Dons a Wetsuit and Arrives via Jet Ski to Meet the Press 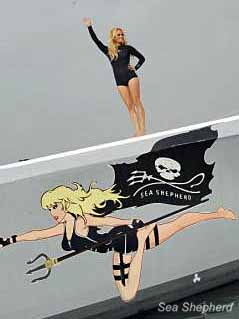 The actress, whom some have likened to French actress Brigitte Bardot due to both actress' stunning beauty and passion for animals, donned a Sea Shepherd wetsuit, rode a jet ski and hugged an activist dressed as a shark, to help launch Operation Zero Tolerance and welcome the SSS Brigitte Bardot vessel on its maiden visit to the mainland U.S. She was met by a large contingent of photographers and media who listened to her speak about why she supports Sea Shepherd's mission to defend marine wildlife on the high seas.

"I love Sea Shepherd," said Anderson. "Sea Shepherd founder Captain Paul Watson and his organization are doing great work," she said. "We have to do everything we can to protect biodiversity in our oceans. As Paul says, 'If the oceans die, we die.'"

In speaking about the legal controversy that has surrounded Captain Watson recently, the actress said: "Paul has been treated unfairly by stupid poachers. But nothing is going to stop Sea Shepherd — ever," she concluded.

The SSS Brigitte Bardot vessel arrived in the Los Angeles area on Friday from its recent campaign in the South Pacific to defend at-risk sharks (hence Anderson's shark hug) with a brief stopover in Hawaii. The vessel will depart Marina del Rey on Nov. 11 for its Antarctic Whale Defense Campaign against Japanese whalers. Free tours for the general public are available throughout the week and include opportunities to meet the crew, some of whom can be seen on the group's hit docu-reality TV show, Whale Wars. For complete tour schedule and updated mooring location, go to: www.seashepherd.org/bardot

Hundreds of members of the public have already toured the ship in is first weekend in dock in Fisherman's Village, including celebrities such as Eric Balfour ("Haven") and Spike Mendelsohn ("Top Chef"). Sea Shepherd volunteers are giving free tours, collecting donations and selling merchandise in honor of the ship's inaugural visit.

Pam spoke to the press about why she supports Sea Shepherd

Pam has a history of supporting Captain Paul Watson and Sea Shepherd. She traveled to Germany this past summer to try and secure Captain Watson's freedom when he was being held there under house arrest after a ten-year-old warrant was brought against him by the Costa Rican government for interfering with an illegal shark-finning operation in Guatemalan waters.

Sea Shepherd is thrilled to have Pam's support in launching our biggest and strongest Antarctic Whale Defense Campaign ever!