Pamela Anderson Delivers for the Seals

Pamela Anderson Delivers for the Seals 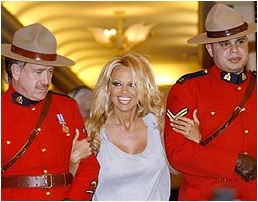 Canadian born international celebrity
Pamela Sue Anderson stood up for a cause she passionately supports and spoke up for the seals at Canada's Juno Awards.

These awards are the Canadian version of the Grammy Awards in the United States and Pam Anderson was the host for this year's presentation in Halifax, Nova Scotia.

Halifax is close to the heart of seal clubbing territory so British Columbian born Pam was deep in enemy territory when she spoke out to condemn the cruel and barbaric clubbing of seals taking place as she spoke.

Before the awards started, Pam, sporting a PETA shirt, mailed off 50,000 names on a PETA petition to oppose the seal slaughter. 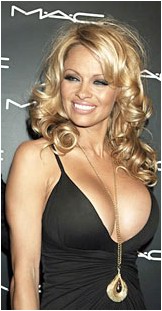 One Canadian journalist wrote: "How long would it take for her to mention the seal hunt? About 27 seconds. This would come in the form of a real knee-slapper involving English musician Seal, who, according to Anderson, didn't come to the Junos because he was afraid he'd be clubbed. Touche, former Baywatch beauty, touche."

When some of the audience booed, Pam responded, "I have high heels and they dig in deep."

The former Baywatch star and international sex symbol said that the protests against the seal slaughter will get stronger.

This year has seen the strongest protests ever mounted against the seal slaughter. The clubbing of the seals has ignited protests around the world and has attracted high-profile opposition from Sir Paul and Lady Heather Mills McCartney, Brigitte Bardot, Pamela Anderson, Persia White, Martin Sheen, Richard Dean Anderson, Rutger Hauer, Dan Haggerty, and Anna Nicole Smith.

Denouncing Her Province: Newfoundland native Nadine Saunders is so disgusted by the annual slaughter of hundreds of thousands of harp seals in her native province that she wishes that she hadn't been born there. That's why she will be returning her birth certificate to the Newfoundland government today in protest of the seal hunt that takes place every spring on Canada's East Coast.

"Thousands of helpless baby seals are bludgeoned to death in the province where I grew up. It makes me ashamed to be a Newfoundlander," says Nadine.

"The world is watching, and it is appalled by our barbarism," says Nadine. "If our government stops this cruel slaughter, I will ask for my birth certificate back, but until then, I cannot hold my head up as a Canadian." [See a letter written by Nadine below this article].

Hunger Strikers for the Seals: Dr. Jerry Vlasak continues to refuse food in a Charlottetown jail cell where he is serving a 22-day sentence for refusing to pay a $1,000 fine for witnessing the killing of a seal. In Canada, it is a crime to approach a sealer killing a seal without permission of the government of Canada.

With all the Seal Hunt media coverage in the last few days/weeks, I have a feeling that at this point in time most of Canada and the world think that every single person in Newfoundland supports the Seal Hunt. Thank you for putting all of us onto your animal cruelty agenda. I grew up in Newfoundland and lived there for half of my 31 years on this earth..... and I can tell you that not ALL of us feel this way.

The Seal Hunt is unfortunately an ingrained part of the closed-minded part of the Newfoundland population, and has been for many generations. Many Newfoundlanders see this as their God-given right.  I'm not one of them.

I think that I can fairly say that a typical Canadian doesn't actually know all that much about Newfoundland. They might know one or two Newfies, or many Newfies if you live in Alberta!

Quebecers (and the media) goes on and on about how Quebec is a distinct society. Anyone who has ever visited Nfld from other parts of this country knows and understands that Nfld is equally distinct, with their own languages, heritage and customs. It is a society on its own in the middle of the Atlantic Ocean, an 8 hour ferry ride to the nearest Mainland destination, that being North Sydney, Nova Scotia.

Many Newfoundlanders have a feeling, maybe even a chip on their shoulder, that the rest of Canada thinks we are all 'dumb Newfies', who 'milk the EI system'. By encouraging this seal hunt as some sort of 'temp employment to feed yer kids' you are perpetuating the myth that Newfoundlanders are uneducated and cruel rednicks.

Newfoundlanders have a not-so-great history with their own Government's mis-management of natural resources. The DFO has brought the Atlantic Cod fishery into a state that will never recover.

I fail to understand, after everything that has happened, how so many of my fellow Newfoundlanders, including yourself as Premier, still take what the Government in Ottawa and the DFO says as "gospel." These officials CLEARLY don't know what they are doing!

It doesn't take a Scientist to figure out that the Cod fishery is dead because of overfishing and the wastefulness of the drag nets and the industry in general, not the Seals.

Many individuals live in tiny rural communities in Newfoundland, and have never even left the province. Some only know one way of life...and that suits them just fine.

However, the upcoming "bloodbath" on the ice will remain in our memories and in our hearts for years to come. Regardless of how much money the province of Newfoundland and the country will put into tourism, it will not take that image of seals being brutally slaughtered from our minds.

The rollin' of the sea, won't be beckonin to me, I can guarantee you that, Mr. Premier!

Until this slaughter stops I will be forced to boycott my own province. Newfoundland is a rugged, natural beauty of Canada. I only wish that the people of this country including yourself would see it as such, and come up with more creative methods of bringing money into my home province.

I live in Vancouver now, and B.C . has a HUGE tourism industry because of the 'natural beauty'.

When I walk along the shoreline here in Vancouver with my dogs, I think of my far away home province that I love so much.

The quiet times spent walking among the  driftwood, the silence and the stillness. Animals and nature together.

Yet how many Canadians have actually made that 8 hour ferry ride to get to know about the Newfoundland culture and beauty? If the rest of Canada actually saw the rugged coastline, the Whales in their natural habitat, the fog rolling into the harbour in St. John's....you would feel a connection to the sea and the land, as do I, having grown up there.

What we all need to do is to work together to bring Newfoundland into the greater Canadian collective, and in a positive way. With all the blood, sweat, and tears I put into helping animals every day, I don't want to be seen around the world as a cruel, murderous Newfoundlander.

The Seal Hunt gives us a great opportunity to educate people, and show them what Newfoundland and Canada REALLY is. A humane society that cares about animals. There may be some deeply ingrained traditions in Newfoundland 'heritage' and 'culture', but in 2006 we should be showing the world how we've evolved from the cave man days and promote our province instead for it's ski resorts, cozy winter log cabins, snowmobiling, etc.

There are many other ways to subsidize the cold harsh Nfld winters than going out onto the dangerous ice flows, endangering our husbands and boyfriends, and killing innocent animals.

Why do you refuse to see that eco-tourism is the more viable and self-sustaining option for the province in the long run?

I believe that if all of Canada supported Newfoundland with a genuine interest in coming up with creative alternatives for employment, rather than Ottawa just throwing money into band-aid solutions for temporary and seasonal jobs, then things might actually change there for once.

But maybe I'm wrong, what do I know? I'm just another 'stupid Newfie'!