Overwhelming Public Support for the McCartneys' Visit to the Seals

Overwhelming Public Support for the McCartneys' Visit to the Seals 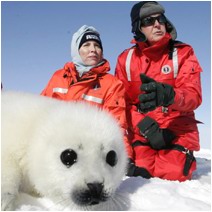 Some of the Canadian media attacked Paul McCartney and Heather Mills McCartney, and some Canadian media ignored them. However, the international media gave positive coverage to the visit by Sir Paul and Lady Heather McCartney when they visited the nursery of the harp seals on Thursday, March 2.

They were escorted to the ice by longtime anti-sealing activist and native of Newfoundland. Rebecca Aldworth of HSUS.

The McCartney's will appear on CNN's Larry King show this evening (March 3) to talk about their opposition to the slaughter of seals on Canada's Eastern Coast.

"Of course, some of the Canadian media were negative. We refer to the Canadian Broadcasting Corporation. At least we have the Canadian newspaper the National Post siding with the seals," said Captain Paul Watson.

The CTV coverage was so biased it was glaringly apparent that they were not even pretending to cover both sides of the story. They only presented the government regurgitation of "most humane hunt in the world, blah, blah, plenty of seals, blah, blah, anti-sealers are distorting the facts, blah, blah."

Of course, they did not allow for anyone opposed to the seal slaughter to speak and even ended with a shot of a little seal playfully biting at Paul's hand as evidence of the "viciousness" of the seals with the comment that "seals are not as friendly as Paul McCartney thinks!"

They neglected to mention that the milk teeth of new born seals cannot even penetrate the skin. And, of course, they told the lie that Canada does not kill seal pups - only adults. The government's definition of an adult is a seal being over three weeks of age.

People can complain to CTV at news@ctv.ca.

On the other hand, (during the morning of this day) the poll on the AOL website with 49,720 respondents has 84% opposed to the seal hunt with only 11% saying they don't have a problem with it and 5% having no opinion.

What is interesting is that the poll conducted by the Charlottetown Guardian newspaper in Prince Edward Island where the McCartney's departed by helicopter to see the seals has 83% opposed to the hunt and only 17% in favor.

So the international poll conducted by AOL matches the results of the local poll hosted by a newspaper in the heart of the sealing country and the Canadian government insists that 60% of Canadians support the seal slaughter.

The St. John's Telegram ran an article about a Beatles fan meeting Paul McCartney at the airport, getting his autograph, taking his picture and going gaga over the man. Yet strangely, the article did not mention why Paul McCartney was even there. They opted for to ignore him as a protester and cover him only as a celebrity.

But the rest of the world has not ignored Paul and Heather. The pictures of the two of them posing with a baby seal will be published around the world.

After this visit no one will be unaware of the horrific annual mass slaughter of hundreds of thousands of seal pups on the ice off the East coast of Canada.

Thank-you Paul, thank-you Heather, and thank-you to Rebecca Aldworth for hosting the visit of one of the world's greatest musicians to the ice nursery of the baby harp seals.

You can still vote in the AOL Poll by going to: