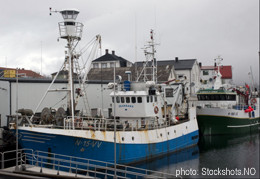 During the evening of April 23rd, conservation commandos from Agenda 21 slipped onboard the Norwegian whaling ship Skarbakk in Henningsvaer in the Norwegian Lofoten Islands. With a monkey wrench they disassembled the salt-water intake valve (used for cooling the main engine). They then opened the valve and flooded the engine room.

As the ship settled low in the water, local firefighters arrived with pumps just in time to prevent the ship settling on the bottom. By then the ship had been completely filled with water however, destroying the machinery and electrical systems.

This scuttling represents losses for the ship's Norwegian underwriters and for Japanese investors who were partners with the owner of the Skarbakk.

The Agenda 21 commandos left a note that read: "We came to Henningsvaer. We saw the Skarbakk. We sank the bastard - Agenda 21"

Agenda 21 is a covert group that takes its name from the 1992 United Nations Conference on the Environment. Captain Paul Watson said at the conference that if Norway did not comply with international conservation law that Sea Shepherd would sink their ships. Captain Watson supervised the sinking of the Nybraena in 1992 and the Senet in 1994. After that the covert and anonymous organization Agenda 21 based in Norway took over the responsibility of enforcing international law against illegal Norwegian whaling operations.

"We don't know who they are, and we have no forewarning of their plans," said Captain Paul Watson. "But we do applaud their efforts, these laws must be enforced and Norwegian whalers are in blatant violation of the worldwide ban on commercial whaling. We are happy that Agenda 21 took over this task back in 1996 with the scuttling of the Elin-Toril. If I knew who they were, I'd give them a medal. It's always better when these things are taken care of by citizens in their own country and the Norwegians who are battling the whalers are like the resistance fighters who once took on the Nazi's in Norway - brave men and women trying to defend lives from war criminals. In today's whale wars, those who slaughter the whales are criminals and no different than elephant poachers in Africa. Except in Africa they shoot the poachers."

Click here to watch Norwegian News Video of the scuttling