Operation No Compromise: Defending the Integrity of the Southern Ocean Whale Sanctuary

Sea Shepherd ships will return to the Southern Ocean Sanctuary unless a kill quota of zero whale kills is established.

“The killing of even one whale is a violation of international conservation law,” said Captain Paul Watson. “In addition to protecting the lives of individual whales we are also defending the integrity of the Southern Ocean Whale Sanctuary. Whaling ships from Japan or anywhere else have no legal right to kill whales within the Sanctuary.”

The Sea Shepherd Conservation Society rejects the compromise being brokered by nations like New Zealand and the United States with Japan.

“I am amazed that these nations are negotiating with poachers,” said Captain Watson. “They don’t negotiate with elephant poachers, shark finners, and drug traffickers, so why do the Japanese whalers get special consideration? The answer of course is that Japan is an economic power and makes demands backed up by economic pressure.”

The campaign next December will be the 7th campaign by Sea Shepherd to intervene against the poaching of whales by the Japanese fleet in the Antarctic Whale Sanctuary.

Sea Shepherd’s next campaign will be called Operation No Compromise in recognition of our rejection of the compromise deal on the table before the International Whaling Commission.

“If they push compromise, we will answer with confrontation,” Captain Watson said from Colorado Springs, Colorado where he is giving a lecture to Colorado College.  “New Zealand claims that the compromise will cut the kill quota in the Southern Ocean in half. We have already cut it in half so the compromise will achieve nothing additional. We’re not satisfied with half, we want 100% protection, nothing less. If the compromise cuts the quota in half than we will return to cut the reduced quota in half, or more than half. We will not quit the sanctuary until the last harpoon is retired.”

The Whale Wars third season will air on June 4th in the U.S. on Animal Planet.

There will be no surrender and no retreat by Sea Shepherd, it will be No Compromise until we drive the Japanese whaling fleet from the Southern Ocean Whale Sanctuary – forever! 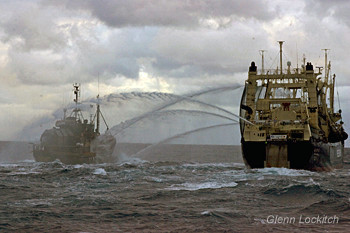