Operation Ferocious Isles: Defending the Rights of Whales in the Faeroe Islands

However, Sea Shepherd isn’t headed to the Faeroe Islands to protest or speak out against the horrific slaughter of the pilot whales that takes place in this barbaric ritual called the “Grindadrap” or simply the “Grind.” Sea Shepherd’s objective is to use aggressive non-violence to intervene in the “Grind” whenever possible, and also to focus international public attention on this mass slaughter which is even more cruel and bloody than the dolphin slaughter spotlighted in the Academy Award-winning film The Cove.

“How can we as Europeans be critical of the killing of dolphins in Japan while ignoring the cruel massacre of entire pods of gentle and defenseless are pilot whales in Europe?” said Sea Shepherd France President Lamya Essemlali.

“Our objective is not to exercise our freedom to speak out against this illegal slaughter of defenseless pilot whales, but to shut down this atrocity. Petitions, protests, banner hanging, meetings, and speeches have not advanced this objective in any way,” said MacLean aboard the Steve Irwin in Barcelona. “Talking has proven to be a waste of time. While humans prattle on about tradition and rights, intelligent, socially complex, beautiful pilot whales are violently driven into bays and cruelly butchered in a spectacle that has no place in a civilized world. We don’t wish to dialogue about this obscenity, we wish to stop it. The rights of these whales to live takes precedence over the ‘rights’ of the Faeroese to murder them.” 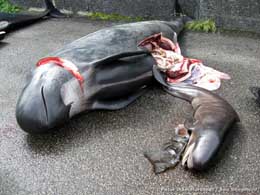 Sea Shepherd plans to emphasize that while the Faeroes are benefiting from European Union subsidies, they are claiming exemption under European laws forbidding the slaughter of whales. Sea Shepherd hopes to force an engagement with the Danish government as a means to provide a foundation for legally calling Denmark to task for providing benefits to a people who openly flaunt European law. If Iceland cannot join the EU because they are a whaling nation, then the Faeroes should not be able to benefit either while they are doing the same thing. This is plain discrimination against Iceland in favor of the Faeroes.

“The Faeroese say they have a traditional right to massacre entire pods of whales,” said MacLean, “But no human being has the right to torture and slaughter another sentient being. What the Faeroese call a ‘right,’ we call a travesty. This is like being asked to respect Ted Bundy or Charles Manson, and Sea Shepherd has no intention of respecting the rights of cruel psychopaths. You don’t try to talk to a psychopath, you try to stop them before they kill again.”

Since the early 1980s, Sea Shepherd has been leading the opposition against the slaughter of pilot whales in the Faeroe Islands. Captain Watson led campaigns to oppose the hunt in 1985 and 1986, and again in 2000. Not a single whale was killed while Sea Shepherd patrolled the islands. Sea Shepherd was also successful in convincing 20,000 stores within two grocery chains in Germany to boycott Faroese fish products.

During the Summer of 2010, Sea Shepherd took the initiative and sent an undercover agent to the Faeroe Islands to gather visual images of the gruesome “Grind;” Images that were later used to expose the mass murders of pilot whales to the public. Sea Shepherd and the Brigitte Bardot Foundation have tested acoustical devices intended to keep pilot whales away from the Faeroese shore. These devices will be deployed deploy to form a curtain of sound between the whales and their killers during Operation Ferocious Isles.

It is estimated that at least 1,000 pilot whales are killed annually during the “Grind.” The Faeroese accomplish this by corralling pods of migrating pilot whales as they travel in family groups past the islands into shallow coves. Once spotted, these cetacean families are driven near shore where select men, assisted by children, are awaiting to methodologically sever the spine of each whale using a special knife, one by one, as they die a slow death and the water turns red with their innocent blood. Often, in peak summer months, pregnant female pilot whales are also rounded up and suffer further injustice as fetuses are cut out of their bodies and lined up near shore alongside the hundreds of other victims.