Operation Blue Rage: Inside the Line of Death in the Gulf of Sidra 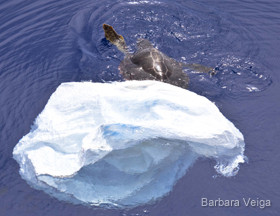 Although we did not find any poachers today, we did save a life. We passed a green sea turtle struggling on the surface with its back flippers entangled in a large heavy plastic bag. Two of the crew dove in and cut the bag away and we watched the turtle swim off tired but unharmed. The swimmers brought the bag back on board, a cement bag of heavy plastic from Turkey.

Yesterday, Greenpeace activists on the Arctic Sunrise attempted to open a tuna cage some twenty-two miles south of Malta. They were prevented from releasing any fish by the intervention of the Maltese Navy. Malta has stated that they will be seeking criminal charges against Greenpeace for the incident.

There really should not be a legal fishery at all, and if the fishery was not as lucrative as it is, the bluefin would now be fully protected as an endangered species. But with a price of between $75,000 and $150,000 USD per fish, the days of the bluefin are numbered unless this unique aquatic predator is given full and absolute protection.

It is incredibly frustrating to see these “legal” cages, but it is fruitless to try and free them because they are under military protection and any attempt will be merely symbolic and unsuccessful. That is why we are concentrating on looking for tuna taken illegally and not under the protection of the military. We can take on the fishermen, but not the guns of the Navy, and we have no interest in capturing headlines. Our interest is in capturing poachers.

I do however think that the presence of both Greenpeace and Sea Shepherd this year has motivated the European nations to be much more vigilant in the enforcement of the regulations, more than any year before. So if nothing else this has served to reduce the illegalities by the licensed fleets.