The fishermen are calling the closure by the EC “unacceptable.”

EC Fisheries Commissioner Maria Damanaki explained that the advancement of the closing was due to the fact that the Community fleet had exhausted the quota it had been assigned.

The President of Europêche, Javier Garat, has called the decision “intolerable” and is demanding that the EC justify their decision. According to the fishing companies, the decision was made as the result of  “pressure from the radical ecological movements” and they are complaining that they have been put into a state of  “legal insecurity.”

What is amazing is that the fishery was closed because the quota was reached but the fishermen appear to be arguing that they should have the right to continue fishing until June 15th. 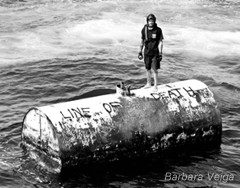 It is gratifying to see that the fishermen are blaming us “radical ecologists” for the closure. Personally, I think that Europe has finally realized that unless action is taken now they will be making the same mistake the Canadian government made in presiding over the destruction of the North Atlantic cod fishery.

This year could very well be a success just by all of us being here to keep an eye on both the fishermen and the governments responsible for enforcement.

Today, we found a dangerous hazard to navigation: a large steel barrel shaped mooring buoy with 40 meters of chain drifting in the open sea.

I sent two of the crew onboard to see if we could sink it. The thickness of the steel made sinking it impossible so we salvaged two valuable stainless steel shackles and notified the authorities in Malta to issue a warning to mariners. And since it was floating about, we painted SAVE THE TUNA on the side in the event any fishermen came upon it.

Despite the fact that it appears quiet, we intend to continue our surveillance of the seas in search of possible poachers. The small long liners and trawlers that we see are most likely keeping the fishing community aware that we are continuing our patrols. 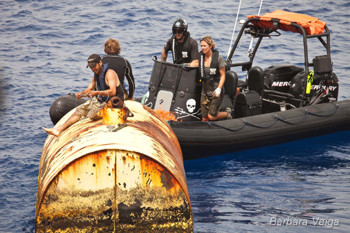 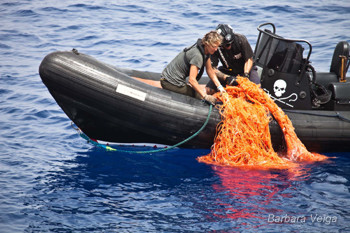