We are at the mercy of the winds. Once the winds die down, we can resume our patrol in search of bluefin tuna poachers.

The European nations have been very vigilant in enforcing the quotas this year and hopefully Tunisia, Libya, and Turkey will be doing the same. We have, however, not seen any evidence of this yet. Once the winds die down, we shall be able to inspect the situation of the Northern coast of Africa.

In reality there should be a zero quota on bluefin tuna. Although the Europeans have been focusing on enforcement of the 13,000 ton quota, the fact remains that the scientific advisors warned that not more than 8,000 tons should be taken. It seems silly and a waste of tax dollars to hire scientists whose advice is ignored.

If not for the economic and political pressure from Japan and China, the bluefin would now be listed as endangered by the Convention on the International Trade in Endangered Species (CITES) and our job would be much easier. But in a world of ever diminishing biodiversity, science is being tossed aside as the criteria for management and is being replaced by the dictates of commerce and it’s handmaiden – politics.

When the Steve Irwin left Australia, it was in anticipation of enforcing a total ban on what should be an endangered species. We were not expecting that CITES would be compromised. It has been.

The military and the courts protect the legal fishery, but not the poachers. The poachers also represent about three quarters of the overall catch.

If the Sea Shepherd Conservation Society attempted to cut the nets of the legal fishery, we would accomplish very little other than to make headlines briefly.

Sea Shepherd’s objective is to free bluefin tuna from the nets and cages of bluefin poaching operations. We anticipate a violent defence by the poachers, but that is violence we can defend ourselves from, and we can be successful in our mission.

Thus we wait out the winds, and once abated we will haul up the anchor and carry on with Operation Blue Rage. 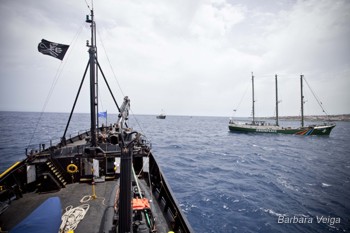