Operation Blue Rage- Day One of the Mediterranean Patrol 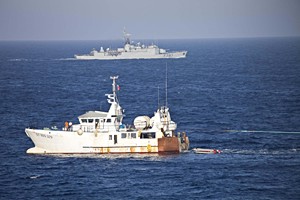 As the Steve Irwin approached closer to the French seiner Massabielle II, the French frigate Commandant Bouan # F979 contacted us on the radio and read out a statement stating that the French Navy was patrolling to uphold the ICCAT (International Commission on the Conservation of Atlantic Tuna) regulations. The frigate inquired as to what our intentions were.

We answered that we were patrolling in search of poaching operations and requested permission to pass close by for the purpose of documenting the seiner in the process of towing a net filled with living bluefin tuna. We were granted permission, and we then filmed the towing operation. The seiner was heading towards Malta to deliver the tuna to the offshore tuna farms to be fattened up for eventual sale to the fish markets.

It was amazing to see a powerful French frigate deployed as a bodyguard for a single seiner, which reflects the cost to the taxpayers of the subsidies given to this fishery. However, in this case the subsidy provided by the navy had a positive effect of having the fishing operations take place under the observation of the Navy and thus in accordance with the laws.

The Sea Shepherd Conservation Society however did not come to the Mediterranean to intervene against the legal operations of licensed vessels.  We came in search of poachers and towards that objective we continued on Southeast towards the coast of Libya.

We were seeing the result of our Blue Rage announcement months ago. Last year, we did not see this level of government enforcement. For the last few years, the Greenpeace Foundation was notably absent, ever since 2008 when they were violently attacked by Turkish fishermen.

Sea Shepherd insiders in Greenpeace Europe have informed us that Greenpeace made the decision to send two ships to the Mediterranean so as not to be upstaged by Sea Shepherd. They also decided to attack the legally registered fishing vessels with the result that Greenpeace was once again assaulted with the loss of three small inflatable boats and the injury to a Greenpeace crewmember whose leg was pierced by a grappling hook.

We are happy to have provided the motivation for Greenpeace to return to the Mediterranean, and it all works out quite well because Greenpeace is a protest organization and Sea Shepherd is a law enforcement and anti-poaching organization. Therefore, there is no overlap: they can protest and we will intervene.

At 2000 hours, the Steve Irwin approached another seiner hauling two cages full of bluefin tuna and moved in to investigate. 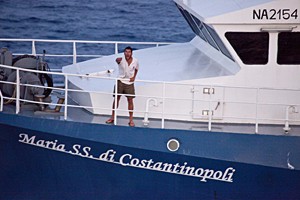 The vessel was the End. The port of registry and their fishing license were obscured but we were able to establish that it was a legal vessel. But as we passed by, another seiner standing off came in fast to intercept. Named the Maria SS Di Constantinopoli with the fishing number of NA 2154, the blue and white vessel moved in to threaten us, and the fishermen on board were clearly agitated. As they pulled alongside, they were screaming, swearing, and shaking their fists. We ignored them. They called the French warship and they called for help from the Italian Navy.

The French warship communicated with them in Italian, and told them to calm down. The Italian Navy sent in a fast corvette but when the French and Italian navy ships arrived they could clearly see that the hysterical Italian fishermen were making a great ado about nothing. It is clear to see that by using two seiners to tow the nets, the costs have greatly increased. One seiner appears to have been deployed just for security on the other.

With darkness closing in, we decided to stop for the night. Being dead center in the main thruway between Libyan waters and Malta, any seiners towing nets would have to pass by us, so it was best to conserve fuel and wait for them and resume the patrol with the ship and helicopter in the morning.

And thus ended our first official day of patrol in the Mediterranean.

There are six legal days left in the season and the legal quotas have not been taken. The licensed fishermen are becoming desperate in their efforts to fulfill their quotas before the deadline. However, we can’t touch them until June 16th, and thus we must restrict ourselves to the hunt for the outlaws, the poachers who pull the bulk of the catch from these waters.