Operation Blue Rage 2011 is focused on intervening against any bluefin fishing operations taking place in the area off the Libyan coast, a region closed to the exploitation of bluefin tuna by the International Commission on the Conservation of Atlantic Tuna (ICCAT) and the European Union fishing commission. 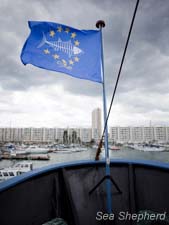 “Our mission is simple,” said Captain Watson. “Any tuna fishing vessel we find off the Libyan coast will be operating illegally. We will cut their nets, free the fish, and document and report their operations to ICCAT and the European Union.”

“I am constantly asked if this is a dangerous operation,” commented Captain Watson. “Of course it’s a dangerous mission, that’s why were the only group going into this warzone. We go where no one else dares to go and we do what no one else has the guts to do – uphold international conservation law.”

During the inaugural Operation Blue Rage campaign in June of 2010, the Steve Irwin intercepted a tuna poaching operation off the Libyan coast. Sea Shepherd cut the nets and freed more than 800 bluefin tuna.

“We suspect that it will be a much easier task this year,” said Captain MacLean. “Every fishing boat in this area is a target for intervention and we have no need to worry about Libyan planes or naval vessels. We will keep NATO forces aware of our activities and we will report our operations to the appropriate European Union officials. We can’t allow the poachers to profit from the war by taking these magnificent endangered fish.”

Sea Shepherd France President Lamya Essemlali is coordinating the intelligence operations for Operation Blue Rage 2011. “We have considerable evidence that there will be many attempts to exploit these unpatrolled waters this season, and we suspect that we will most certainly encounter poachers attempting to profit from the war in Libya,” said Essemlali. “A single bluefin tuna can fetch $70,000 USD in the Japanese fish market. This provides a very strong motivation to break the laws.”