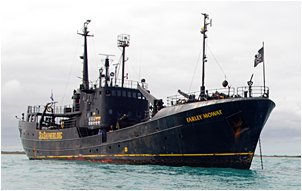 The intent of the voyage was to stop briefly in the Galapagos for fuel, provisions, and crew changes, and then to carry on to the Panama Canal before heading north to Iceland to intervene against illegal Icelandic whaling activities.

However, two factors have intervened to convince us to make a change in plans and to delay our campaign to Iceland.

The first and most important factor is the emergence of a new threat to the entire Galapagos ecosystem and the second is the development of a contractual relationship between Sea Shepherd Conservation Society and the government of Ecuador.

In addition, Sea Shepherd has signed agreements with Amaznor and Selva Vida Sin Fronteras to help protect the Amazon pink dolphin in Ecuador .

This alliance with government and non-governmental organizations (NGOs) in Ecuador is a major responsibility that has been given to Sea Shepherd and is the result of seven years of our effort working with the Galapagos National Park (GNP) to uphold the Special Law for the Galapagos. Special thanks for this must go to Sea Shepherd Ecuador and Galapagos Director Sean O'Hearn-Gimenez and Mariana Almeida, executive president of JUNGLE- Life without Frontiers.

This new agreement binds us even closer to our long-term objectives in the Galapagos and motivates us to address an urgent and imminent threat to the entire Galapagos ecosystem.

An unwelcome ship is presently heading towards the Galapagos to conduct a dangerous experiment in carbon storage by illegally dumping 100 tons of iron dust into the sea in an area 350 miles west of the Galapagos.

In June, the 19 Galapagos Islands and the Galapagos Marine Reserve's (GMR) inscription was changed by UNESCO to a World Heritage Site in Danger.

Despite this, a company called Planktos Inc., (a for-profit enterprise calling itself an eco-restoration company, based in San Francisco in the United States with offices in Vancouver , Canada ), has targeted the international waters west of the GMR as the area to conduct experiments in seeding the oceans with iron dust to accelerate the production of phytoplankton.

Sea Shepherd along with the International Union for the Conservation of Nature (IUCN), Charles Darwin Foundation (CDF), the World Wildlife Fund (WWF), and the Galapagos National Park (GNP) are concerned that this experiment represents a threat because of possible unknown effects it could have on marine life and other ecosystems in Galapagos.

Planktos Inc. does not have an Environmental Impact Assessment (EIA), which guarantees that no harm will be done to the GMR. The CDF has publicly expressed its concern for this unnecessary and risky venture. 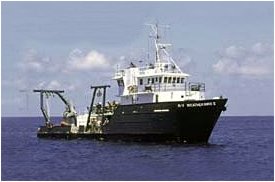 Pictured above is Planktos' flagship the Weatherbird II

The objective of the experiment by Planktos Inc. is to seed the oceans with the iron dust to stimulate phytoplankton blooms, the microscopic marine plants that soak up the energy of the sun to convert carbon dioxide in organic matter and in that way supposedly slow down global warming.

With the U.S. EPA not approving the Planktos plan, there is cause for legitimate concern. Planktos CEO Russ George (a former Greenpeacer) says U.S. regulations should apply only when a firm dumps levels of a substance that are one percent or more above the level considered toxic.

The EPA in a submission to the International Maritime Organization (IMO), of which both Canada and the U.S. are members, urged other countries to scrutinize the project, stating that, "Planktos was not able to provide the EPA with any information ... (on) the potential environmental impacts" of the plan. In particular, the EPA cites the possibility that the project would lead to toxic algae blooms, and that the decomposing plankton masses would release other greenhouse gases or choke off the oxygen supply in the deep ocean. Russ George replied, "The world has spent the last 20 years and more than 100 million dollars" developing the science behind the plan. He added that the plan would not only draw carbon dioxide out of the atmosphere, but by restoring dwindling plankton levels, it would help reverse the acidification of the ocean, a climate-change-related process that is killing the planet's coral reefs.

That claim is disputed by the Carnegie Institution's Department of Global Ecology, which said the absorption of increasing amounts of carbon dioxide is the main cause of ocean acidification in the first place.

"Sea Shepherd views this plan by Planktos Inc. as a scam to take money from corporations in return for carbon credits earned for lowering carbon emissions supposedly to slow down global warming despite the fact that there is no scientific evidence to suggest that this will work," said Captain Paul Watson, founder and president of Sea Shepherd. "Sea Shepherd's primary objective is to investigate and intervene against activities that are in violation of international conservation law and protect ocean ecosystems."

Admittedly, this is an experiment to see if it will work but Sea Shepherd is opposed to experimentation that may have negative consequences for marine ecosystems. Sea Shepherd doesn't believe in playing dice with marine ecology.

This activity, according to CDF, worries the international scientific community because the potential environmental impacts of the project are unknown. "The 'iron hypothesis' was first suggested by John Martin, an oceanographer at the Moss Landing Marine Laboratory in California , who died before his idea could be properly tested," according to the British newspaper The Independent on May 3rd, 2007.

Stuart Banks, an oceanographer with the CDF, has expressed concerns that the unique ocean current system influencing Galapagos could move the iron dust into and around the GMR. Banks said, "Surface flow would transport most of the surface iron initially to the west. Although a proportion would be metabolized rapidly by surface blooms pushing eastwards, a proportion may sink and return to the reserve in the opposing equatorial undercurrent or via the north equatorial current in the surface, then back down through Galapagos.

"Unknown effects could come into play upon normal microbial processes and create possible toxic effects upon fish and other animals living in the open seas rather than exclusively near land. The phytoplankton/ zooplankton groups at the dust release site could be damaged as well. Another fear is that the presence of iron dust could imbalance the natural oxygen's levels in the sea, causing serious problems to some marine life.

"Isolated iron dust seeding will probably generate short-lived phytoplankton blooms that are ineffective given their objective to improve CO2 sequestration in deep water. Just constitutive release of trace iron as found with natural processes such as along shore, or wind-driven upwelling support high productivity systems over time", according to Banks."

The CDF researchers fear that large events offshore potentially may deplete nitrates and phosphates otherwise metabolized where those natural upwelling processes (and their dependant communities) occur, causing imbalance and impoverished systems in other places.

The CDF has questioned if it is worth the risk to be experimenting with one of nature's greatest and best-preserved treasures. The CDF also believes, (and Sea Shepherd concurs), that without an EIA to validate this experiment taking place so close to Galapagos there is more to lose than to gain.

Planktos Inc. claims that this project will enhance the environment and that iron fertilization programs such as that being undertaken by Planktos Inc. have claimed wide-ranging benefits although these claims have not been proven and are based on an incomplete understanding of how carbon fixation and retention are regulated in the open ocean, of the pivotal role played by hydrodynamics, climatic fluctuations, and nutrients other than iron in controlling the development and subsequent degradation of phytoplankton blooms.

This problem is the type of situation that Sea Shepherd was founded to address. As noted in the preamble to the London Convention, all States have the responsibility under international law to ensure that activities within their jurisdiction or control do not cause damage to the environment of other States or of areas beyond the limits of national jurisdiction.

The United Nations World Charter for Nature goes even further in stating that all states, non-governmental organizations, and individuals have a responsibility to uphold international conservation law both within and outside of areas of national jurisdiction.

A forensic examination will also determine the chemical composition of the material to determine if the iron dust is pure iron or if it also contains other toxic materials that could be harmful to marine life.

The plan by Planktos Inc. is a violation of the London Protocol and of international regulations that prohibit ocean dumping.

Sea Shepherd's primary objective is to investigate and intervene against activities that are in violation of international conservation law.

The ship can monitor the movements of the Planktos Inc. vessel and can intercept the vessel in the planned area of deployment 350 miles west of the Galapagos.

Sea Shepherd has extended invitations to representatives of the IUCN, WWF, CDF, the U.S. EPA, the Ecuadorian National Environmental Police, the Ecuadorian Navy, the Galapagos National Park , and other interested parties to participate in the voyage to observe and to collect evidence of the Planktos Inc. activities.

Sea Shepherd will work in cooperation with all the participating bodies to work out a more detailed plan of action acceptable to all participating organizations.

Sea Shepherd will also document and publicize the activities to educate the general public concerning the operation and the potential damages such an operation could cause.

This coordination must take place immediately because of the imminent deployment of the iron dust in waters close to the Galapagos Marine Reserve.

Sea Shepherd will investigate the possibility of criminal charges and/or a civil suit against Planktos Inc. in the United States .

The one hundred million dollars that is being spent on this dangerous sci-fi venture could be better spent on converting the entire energy infrastructure on the Galapagos to solar power and the replacement of all fossil fuel powered vehicles on the islands with electric cars. Sea Shepherd will be submitting to the Ecuadorian Ministry of the Environment a proposal to solarize the islands.

Reports from the IUCN and the Galapagos National Park