O.R.C.A. Force modified basic UAV equipment to reach their goals. Hostile weather conditions almost ruined the execution, but the exceptional skills of the team’s UAV flyers resulted in a successful mission. “Flying was horrible today,” explains “Mr. Biggles.” The low cloud base, filled with moisture, clogged our instruments. At one point I was making zero progress over ground, while my air speed was over 30 mph. Not having a visual on the aircraft, knowing it’s over water, that’s when you get slightly concerned,” he grins. “Nevertheless we got what we wanted, retrieved the aircraft and didn’t get caught. I can’t wait to come back here.”

After this year’s experience, Sea Shepherd is determined to return to the Southern African country. “We achieved such a great result with a minimum amount of equipment. Our next goal is bringing unmanned aerial systems that can fly for hours,” says South African coordinator Rosie Kunneke. “Equipped with a high-tech video we’ll be able to record every step of the Namibian seal slaughter at Cape Cross — the second biggest tourist attraction in the country. From the moment the cruel clubbers step on the pristine beach to kill the nursing baby seals to the moment they leave the processing factory in Hentiesbaai, Sea Shepherd will stream the biggest slaughter of marine wildlife in the world to a global audience — all of them potential tourists. However, there is an alternative for Namibia: End the pointless seal slaughter. In that case Sea Shepherd will stream video of live seals, enjoying the protection of the Cape Cross seal reserve, just as is supposed to be the case in a reserve. 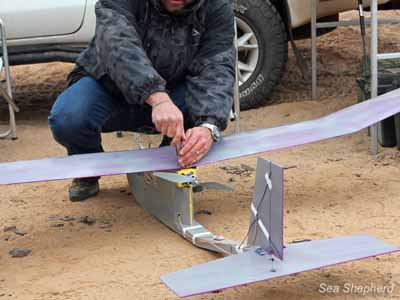 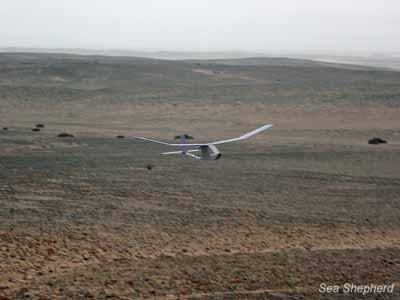 The UAV returns from a successful flight
Photo: Sea Shepherd