Notes from the Front on the Tasmanian Pilot Whale Stranding

It took all day to drive to the north coast of Tasmania and to arrange an aircraft charter.  We arrived in the evening. Fifty-three out of 54 live pilot whales were returned to the sea thanks to a tremendous effort by Parks and Wildlife, DPIW and the local community.  Only one whale remained, unable to be relocated, by increasingly more treacherous surf.  Our crew assisted in sustaining the one lone female that remained from the Naracoopa stranding. We made an attempt at 0900 the next morning to take the lone pilot whale back out to sea, but sea conditions made it impossible. So we stood another day and night watch to ensure her well-being so that we could assist the Park in reintroducing her to open water at the first break in the weather. Her breathing was regular, she still had her strength, and we were able to move her above the high tide mark where she could safely spend the night. It was amazing to feel her whole body rise with every breath that she took as we poured bucket after bucket of water over her body to keep her moist, protecting her from the sun and wind. She wanted to live.

As we continued to fight to save the life of this beautiful creature, the question remained as to why these strandings are happening. Very little is known about the behaviour of pilot whales, let alone the reasons for cetacean strandings. What is known however is that sonic pollution, whether through oil and gas exploration or military maneuvers, effects whale sonar. Without their sonar, cetaceans are unable to gauge their distance to shore and end up swimming blind. This is extremely troubling in a place like Tasmania, where the geography makes whale strandings a likely occurrence. No natural seismic activity has been reported within 2,000 miles of Tasmania, raising further questions as to whether or not human factors are involved in the mass stranding. More than 500 whales have stranded in the past 9 weeks. The Sea Shepherd Conservation Society is asking the Australian Government to look into the effects of sonic pollution on whale feeding, mating, and migration patterns so that ecological sound barriers can be established to protect cetaceans.

It was a long hard day working alongside some of the most passionate whale defenders in the Southern hemisphere. We started our campaign to defend whales in the Southern Oceans three months ago by heading to the Australian Antarctic Territory to prevent the Japanese whaling fleet from reaching a self-imposed quota of 935 Minke whales and 50 endangered Fin whales and are ending it by doing everything that we can to save the life of one lone pilot whale.

Over 80% of whale strandings in Australia happen in Tasmania. The marine mammal rescuers on the field in Naracoopa are experts in their field. What we've seen in Naracoopa in the past 24 hours from Parks and Wildlife, DPIW and the numerous other groups involved in the rescue effort, is the same compassion and dedication that we bring with us to the Southern Ocean Whale Sanctuary every year when trying to stop the Japanese whaling fleet. As we continue to work side by side with the Tasmanian whale rescuers, we're constantly reminded that every single one of these whales is a unique individual, and every life that we are able to save is a victory.

Many thanks to Captain Paul Watson, Rob Holden, Jeff Hansen, Vanessa Pearce, Benjamin Baldwin and the crew of the M/Y Steve Irwin for allowing us the opportunity to help in the rescue efforts.

At 0800, we began exercising the sole survivor of the Naracoopa mass stranding. She had now spent two days out of the water, so we had very few opportunities left to save her life. For two hours, she was guided around in a small shallow pool of water, where she was encouraged to regain her buoyancy. She would often roll onto her side, but with a bit of exertion was able to consistently bring her blowhole to the surface of the water to grab a breath of air.

Finally the decision was made to bring her down to open water. Two jetskis, towing a strap between them, took over when carrying the pilot whale was no longer possible due to the water depth. At some stage, she proved to be too powerful for even the jetskis, a good sign, so she was released and was monitored, several hundred meters off the coast. Within the hour, she had rejoined a pod of pilot whales off of Naracoopa.

Fifty-four out of 54 live animals, the survivors of the Naracoopa mass stranding are back out at sea, a testament to the courage, passion and dedication of a coalition of government agencies, environmental groups and caring local residents. Our thanks go out to Tasmania Parks and Wildlife, the Department of Primary Industries and Water and the people of King Island for allowing us the opportunity to assist in one of the most successful marine mammal rescue operations in Australia. 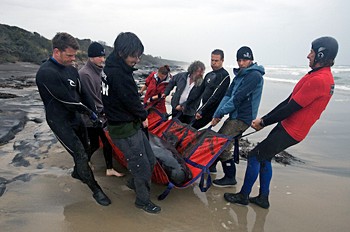 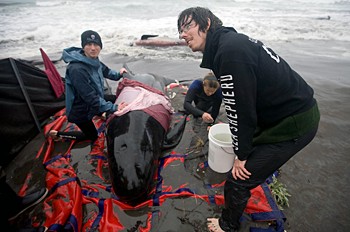 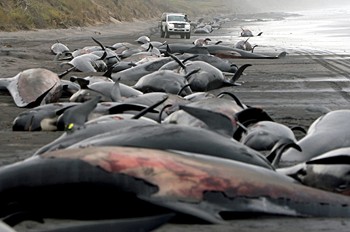 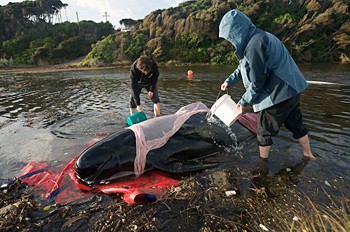 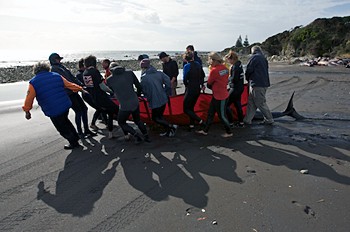 All photos by Adam Lau