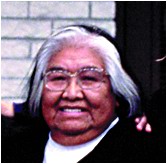 Alberta "Binki" Thompson is the courageous Makah Elder who stood up in defense of the whales at Neah Bay. She was the inspiration and spiritual leader of the campaign to oppose the killing of whales by a minority of the Makah nation. Her dog was killed, her home vandalized, her grandchildren were beaten and her life was threatened. But she never surrendered to those who wanted to kill the whales. She was the voice of the che-che-wid - the Makah name for the gray whale.

Recently, Binki took a bad fall at home, fractured her hip and had to have surgery. She is in good spirits but frail, as she is 83.

Sea Shepherd Conservation Society has sent flowers to her bedside along with the following message to Alberta from Captain Paul Watson:

It is hard to believe that it has been almost seven years since the death of that one very special whale named Yabis.

And it has been so long since we have seen you but you have never been forgotten.

I have almost completed my book on the campaign at Neah Bay and with your permission I would like to dedicate it to you as a woman of the Koditcheeot who has been blessed with the hitÁktÁkxe. The power within you is what has been protecting the che-che-wid.

One young whale did die, but not another in seven years. We intend to continue to fight against those who preach death to the whales in Neah Bay. You have demonstrated that the Makah people can point the way to a new relationship with the whale where it is life that is honored and not death.

If not for our efforts, dozens may have been slain since 1999.

It was your strength that inspired us all during the time that we spent on the water.

Years from now, long after you and I are long departed, more people, both Makah and people not living on the Cape will remember and will honor you for the stand you took.

None of the whalers had your courage or your compassion. The strength of the Makah nation does not lie in the arm of the harpooner, it rests in the heart of the Elders who defended the spirit of the che-che-wid - the gray whale and most of all it lies in your heart.

We appreciate the sacrifices you made and the costs you paid to side with life against those who sought only death.

Our thoughts are with you and I do hope you have a speedy recovery from your injuries and that you are home for the holidays with your family.

All of us at Sea Shepherd love you, Binki. You were, you are, and you will forever be, a true heroine and an inspiration to all of us who are concerned for the whales and for the defense of life, diversity and respect for all sentient citizens of this wonderful and beautiful planet that we live upon. 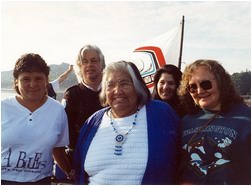 All the best, get well, live long and live happy.

What you have done as an Elder of the Makah Nation will continue to inspire many people for many decades.

Captain Paul Watson
On Behalf of the staff, the volunteers, the directors, advisors, and members of the Sea Shepherd Conservation Society.