Newfoundland Wants to Ban the Symbol of Slaughter

Newfoundland Wants to Ban the Symbol of Slaughter

In a desperate last ditch effort to salvage the dying sealing industry, Newfoundland Premier Danny Williams and Nunavut Premier Paul Okalik are calling for a ban on the use of the hak-a-pik - the spiked club that the sealers use to bash in the skulls of baby seals.

For years these two have argued that the hak-a-pik was a humane weapon for killing seals. Now they are saying that the vicious and medieval looking weapon is a symbol of "bloody carnage" that has to go.

Williams has said many times that the hak-a-pik is no longer used and that the seals are shot not clubbed, a statement contradicted with every image that gets sent back from the baby killing fields.

The hak-a-pik is "a real image problem for us," said Okalik.

The Sea Shepherd Conservation Society is opposed to the killing of seals no matter what weapon is used.

"We are opposed to the clubbing, shooting, and skinning alive of baby seals period," said Captain Paul Watson.  "The rifle is even more cruel than the hak-a-pik and the Sea Shepherd crew observed wounded seal gut shot seals wallowing in their own blood on the ice, screaming pathetically in agony as the sealers laughed like sadistic revelers at a baby bashing party."

"What they are attempting to do is to sanitize the slaughter in the belief that the Europeans will accept Canada's annual ritual of blood and gore on the ice," said Captain Watson.

The Sea Shepherd Conservation Society is confident that the European Parliament will reject the apologists of cruelty and death and will pass the measure to ban all seal products into Europe.

"When they do that," said Watson, "Europe will have moved humanity up the ladder of evolution and civilization." 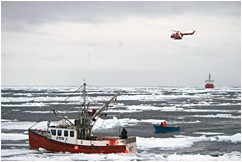 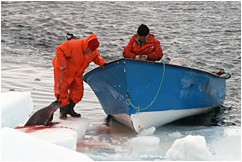 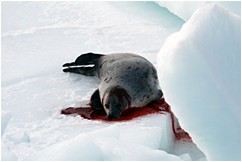 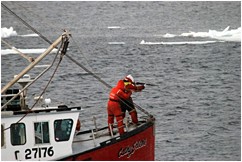 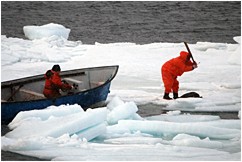 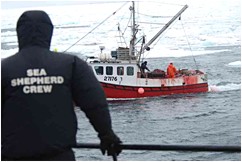 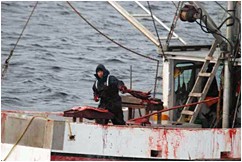 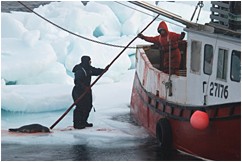 Click here for more photos of the seal hunt