New Zealand Surrenders to the Whalers; Australia Likely to Follow Sea Shepherd Will Fight On!

New Zealand Surrenders to the Whalers; Australia Likely to Follow Sea Shepherd Will Fight On!

New Zealand is backing down on the promise to take the Japanese government to the international court in the Hague, and Australia appears likely to back down as well with the decision put on hold.  The Sea Shepherd Conservation Society predicted a year ago that the posturing of the Rudd government in Australia to take "action" against illegal Japanese whaling would be all smoke and mirrors, and a political gimmick to capture the votes of the whale-loving Australian public.

Australia has spent more than a million dollars gathering "evidence" of illegal Japanese whaling activities inside the Australian Antarctic Territorial waters. However, yesterday The Australian reported that according to Foreign Minister, Stephen Smith, the Government would make a final decision on whether to pursue Japan in an international court "at an appropriate time" based on legal advice and the evidence gathered by the Customs vessel Oceanic Viking.

"It appears we may be on our own," said Captain Paul Watson of the Sea Shepherd ship Steve Irwin. "It's just us and the Australian people now, but we have demonstrated that we can shut down these whaling activities and given the support we can be 100% effective instead of being 50% effective this last season. The secret is to keep the whalers on the run and we intend to do just that." 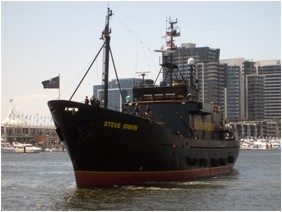 The Steve Irwin is presently being refitted in Melbourne with a new helicopter deck and hanger and new fast boats.

"We have no intention of surrendering to these whale killing thugs," said Captain Watson. "Every year we have been more effective than the year before and we intend to make the 2008/2009 whaling season into the most spectacular display of direct action intervention yet."

Sea Shepherd hopes the Australian public will pressure the government and it won't abandon its $1 million attempt to take Japan to the international court.  However, the Society is moving forward with plans and preparations for the Steve Irwin to return and defend whales in the Antarctic Whale Sanctuary next season.

"Politicians rarely solve problems," said Captain Paul Watson. "Usually they are the problem, because the role of government is to serve corporate interests first, people second and the environment third, if at all. Trade considerations usually trump human rights and environmental concerns. It's rights for the humans only if the price is right and concern for the environment if it does not involve anything more serious than better light bulbs and replacing plastic bags with a reusable sack."

Captain Paul Watson will attend the International Whaling Commission Meeting in Santiago, Chile in June and the Sea Shepherd ship Steve Irwin will return to the Southern Ocean to once again engage the Japanese fleet in December 2008. 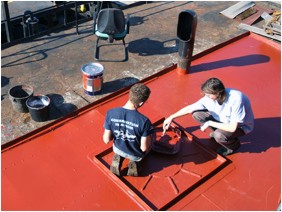