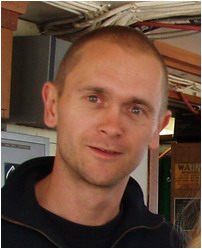 Captain Paul Watson has turned command of the Farley Mowat over to 1st Officer Alex Cornelissen.

Alex, a citizen of the Netherlands, has been a crewmember on the Farley Mowat since the summer of 2002. He has been 1st Officer since April 2003.

Captain Watson has been looking for the right person for some time to transfer command of the Farley Mowat to. In Alex, he has found the right person. Alex is a very good navigator, deep-sea diver, and excellent 1st Officer who the crew respects greatly.  Alex is a trusted, hard-working, and dedicated member of the Sea Shepherd team, and the Captain, crew, and onshore staff appreciate him very much.

In the coming months, Captain Watson will be working to secure another vessel. Sea Shepherd needs a faster long-range vessel in order to efficiently intercept and shut down illegal Japanese whaling activities in the Southern Ocean Whale Sanctuary in Antarctica. 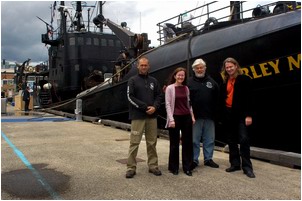 First Officer Alex Cornelissen and Captain Paul Watson with
members of Melbourne's Green Party, in front of the Farley Mowat

Below is a brief bio on Alex's life which we are pleased to share with all our members and supporters.

I was born in a small mining town in the South of Holland. NATO's European headquarters are only a mile from where I lived, so I grew up knowing that if the bomb ever went of, I would be the first to go. My parents taught me respect for all that lives -
values I have kept throughout my entire live.

I was a vegetarian for 10 years before I turned vegan about two years ago. I studied videography in college but started my career as a graphic designer after I moved to Amsterdam in 1996.

I first met with Sea Shepherd in March 2001 when the Ocean Warrior was docked in Amsterdam; a good friend of mine just joined the crew and was going to make a documentary for Dutch television. I remember standing on the docks in IJmuiden watching the ship leave and thinking that I should be on board that ship. I've always had a strong passion for the oceans, but besides being a responsible scuba diver, never really got involved in protecting the birthplace of all life.

By July 2002, I was ready to join. I quit my job, sold my apartment, and put all my remaining possessions in storage. The plan was to join the crew for one year. That year changed my life forever. I learned so much - I saw the destruction that's taking out all life at an alarming rate and realized I couldn't turn my back on it. I decided to stay.

I've been involved in many successful campaigns: 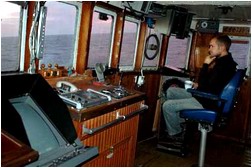 • Dived in waters ranging from 34 F to 80 F, dockside and open ocean, whether it was checking the propeller, freeing animals from longlines or plugging a hole to stop the ship from sinking. 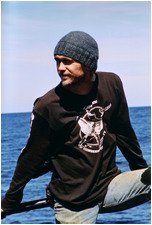 • In December 2002 to January 2003,  participated in the first Sea Shepherd voyage to Antarctica to protect whales from the illegal Japanese whalers.

• In November 2003, Allison Lance Watson and I dove into the waters of Taiji, Japan, where we freed 15 dolphins from a certain death from the dolphin drivers who every year kill thousands. Some of them end up in the ever growing number of "swim with dolphin" programs that we unfortunately see all over the world now; most of them end up in the sushi bars in Tokyo. We were arrested for this and were charged with "interfering with commerce" for which we spend 23 days in jail and eventually got fined $ 8000, $ 533 per dolphin. A price we gladly paid.

• In March 2005, I participated in my first, and so far only, seal campaign. I have never witnessed a bigger massacre and hope that the Canadian government puts a stop to it. If not, I will return to do whatever I can to keep the blood off the ice. Eleven of us were arrested for approaching the seal hunt within half a nautical mile and spent one night in jail. We have recently been fined $ 1000 each for this "offense" - money that the Canadian government is never going to receive from me.

• In December 2005 and January 2006, I participated in the second Antarctic Whale Defense Campaign against Japanese whaling. We chased their pirate whaling fleet away from the waters they planned to do their killing in and kept them running for 3000 miles. We located their fleet again and disrupted the offloading of whale meat onto a supply vessel and chased them away once more. We later ordered their supply vessel out of the whale sanctuary and sideswiped them to emphasize the seriousness of that order. Our presence in Antarctica prevented the whalers from reaching their quota, but we need a faster ship to shut down their whaling operation for good. Of course, I will go back to Antarctica. 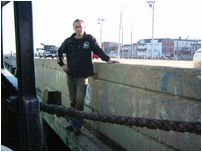