Narrow Escape for the Gojira 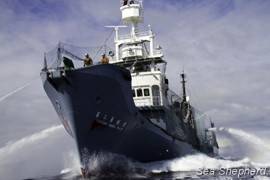 Both the Bob Barker and the Gojira acknowledged the distress signal and radioed the Yushin Maru No. 3 to inquire as to the nature of their distress. They were radioed three times in Japanese and in English but refused to reply.

Despite the fact that Sea Shepherd responded to the distress from the whalers and recorded and monitored this acknowledgment, the Institute for Cetacean Research issued a media release accusing Sea Shepherd of not offering assistance when in fact assistance was offered three times.

The Gojira radioed the Yushin Maru No. 3 stating that they would not be hassled if they stopped trailing the Bob Barker. Sea Shepherd views the tailing of their ships as provocation.

The Bob Barker is now free and clear of the Yushin Maru No. 3 and able to continue the pursuit of the Nisshin Maru. The Bob Barker and the Gojira will continue to pursue and harass the Japanese whaling fleet while the Sea Shepherd flagship the Steve Irwin refuels and takes on supplies in Wellington, New Zealand.

Bob Barker's inflatable Delta boat is attacked by a bamboo spear thrown from
the Yushin Maru No 3 on February 4th, 2011