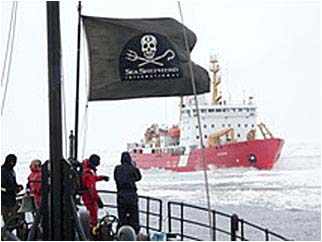 The Sea Shepherd Conservation Society ship Farley Mowat is surrounded by hundreds of living seal pups. Sixteen crew members have fanned out around the ship to be near the sealers. Sealing boats are approaching.

The Canadian Coast Guard Icebreaker Amundsen has stopped pursuing the Farley Mowat and is concentrating on rescuing distressed sealing vessels. A number of the sealing vessels appear to be having problems with the heavy ice. Two are reported as taking on water.

The temperature is unusually warm and the rain is pooling on the ice in many places.

The Farley Mowat has been informed that the ship and crew are in violation of the so-called seal protection regulations (the Marine Mammal Regulations). The crew argued that they all made out applications for permits but the Canadian Department of Fisheries and Oceans made it impossible to obtain the permits by insisting that the ship come into the Magdalen Islands, a place where numerous death threats have been made to the Captain and crew and the place where the Captain and his crew were violently assaulted in 1995.