Just when we thought journalism had reached an all time low with the bogus article from the Guardian in the UK, the Belgian newspaper Het Nieuwsblad brought it down into the sewer with a completely fabricated story [see article text on this page]. They write that Greenpeace and Sea Shepherd attempted to ram each other's ships and that during the "sea battle" the Japanese fleet escaped and now both Sea Shepherd and Greenpeace are desperately searching for the Japanese fleet. 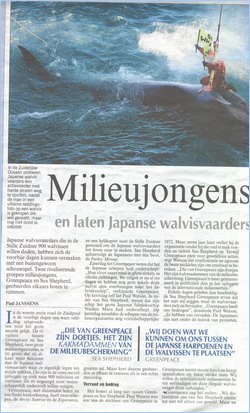 "I don't know what is going on with these newspapers," said Captain Watson. "Neither the Het Nieuwsblad or the Guardian bothered to contact our office or our ship to verify this story. The Het Nieuwsblad story seems to have exaggerated the bogus story that appeared in the Guardian the day before. This really is the shoddiest journalism that I have ever seen and I've seen a good deal of shoddy journalism in my career."

The quote where Captain Paul Watson accuses Greenpeace of "being the Avon Ladies of the Environmental Movement" was indeed made by Captain Watson - 19 years ago.

Sea Shepherd Conservation Society is demanding that the Het Nieuwsblad and the Guardian apologize for publishing articles that are false, having been written without any attempt to verify the accusations. We demand a correction be printed by both publications.

"Greenpeace will back me fully on this," said Captain Watson. "The very idea that Greenpeace would ram us is an insult to them and it is insulting to us to suggest that Sea Shepherd would ram a Greenpeace ship."

Our position is clear.  Sea Shepherd Conservation Society is in full support of Greenpeace efforts in the Southern Oceans to oppose illegal whaling activities. Our two organizations have disagreed on many things in the past but on this issue there is no disagreement. We share a common objective and that is to stop illegal Japanese whaling.

[Click here to read about the Guardian's incorrect reporting]

Below - an English translation from the Belgian newspaper Het Nieuwsblad:

Japanese whalers who want to kill 900 whales in the Southern Ocean, enjoyed an extraordinary spectacle. Two competing environmentel groups GS and Sea Shepherd tried to ram each others boats.

In the rough seas near the Atrctic there was a big battle going on "for the high moral wave". The competition between Greenpeace and Sea Shepherd Conservation Society is so big, that they spy more on each other than on the Japanese whalers they're fighting against. They are looking for 900 whales to kill for so called scientific research.

Greenpeace, with thousands of members and a full bank account, has 2 ships, Arctic Sunrise and Esperanza, and a helicopter in the Southern Ocean to harras the whalers. Sea Shepherd is pursuing the Japanese with one boat, the FM.

On Saturday, Greenpeace announced they intercepted the Japanese fleet: "The fleet seems to be running in circles, stopping and going in different directions. It's the sixth day in a row that we have seen no whales transferred to the factory ship. It's unlikely that whaling is being undertaken," said Greenpeace.

On christmas day, captain Watson (leader of Sea Shepherd) announced having intercepted the factory ship NM. On christmas day, the environmental ships sent each other friendly wishes. Shortly after that, they tried to ram each other in a real sea battle.

The bad blood between Greenpeace and Sea Shepherd goes back a long time. Paul Watson was one of the founders of Greenpeace in 1972. But 7 years later he left the organisation because it was too tame and founded Sea Shepherd. While Greenpeace adopted an ethic of non-violence, Watson believes in confrontation and aggression to achieve goals. "Greenpeace are "the Avon ladies of the environment" and are more interested in publicity than in enforcing international law".

Few days ago Sea Shepherd accused Greenpeace of not wanting to reveil the whereabouts of the whaling fleet.

"Greenpeace has misled Sea Shepherd and betrayed us", Watson shouted. "The Japanese fleet does not give a damn about protests. Greenpeace just take pictures and hang banners. We are down here to enforce international conservation law and to stop the illegal whaling operations."

Greenpeace retorted: "Greenpeace distance themselves from Sea Shepherd because of their inability to commit to non-violent tactics. But we'll do what we can to put bodies between harpoons and whales and protect the whales non-violently,"

A Greenpeace activist climbed recentrly on a wounded whale to prevent the Japanese from launching a second harpoon. The Japanese tried to get him of with water hoses.
It got so heated up, that a collision between the ships nearly couldn't be avoided. Both Greenpeace and Sea Shepherd say that the competing organisation tried to ram their ship, to be able to chase the Japanese alone.

While both organisations where fighting each other and tried to figuer out who has the right to protect the whales, the Japanese whalers disappeared from the seas. The 3 ships search desperate with radar and helicopter for the whalers. It appears the disagreement is solved.

The Japanese don't care. Yesterday Watson from Sea Shepherd said that the Japanese government was sending a war vessel to protect the whaling fleet en to arrest the environmental activists. The Australian marine won't interfere.

"Al this rowing and threats of violence undermines the position of those who want to protect the whales", said the Australian government.

English translation of the above letter:

Reaction on the article in Niewsblad from Alex Cornelissen, Geert-Jan Vons, and Marc Oosterwal on board Sea Shepherd Conservation Society flagship Farley Mowat.

We were shocked to read this article that talks about the battle between Sea Shepherd and Greenpeace. It looks obvious to us that Nieuwsblad gets information from a Japanese source that wants to spread lies to cover up the truth.

Fact is that the Japanese whaling fleet is running away from Sea Shepherd and Greenpeace and that both organisations are working together for the first time in more than 20 years.

Fact is that Japan is killing whales in a protected area (nature reserve) and that apart from Sea Shepherd and Greenpeace no one is prepared to do something about it (it is Australian waters).

Fact is that the Japanese factory ship tried to ram the Farley Mowat on Christmas day (we have video to prove this).

Fact is that the Esperanza is on the tail of the factory ship for 2 weeks now and reports all its movements on their website (we know exactly where the Japanese fleet is, we're not desperately seeking for it).

This kind of sewer journalism isn't what the whales need in their struggle to survive. If Nieuwsblad needs stories so badly, it can always contact us and we're prepared to write some things (in Dutch, that saves them a translation), but spare your readers these nonsense.