Memorial for a Brave and Inspirational Makah Elder

“Binky” as we all affectionately called Alberta was vilified and scorned by some of her own people for opposing the whalers, but she stood her ground. She was the foundation upon which all the efforts of conservationists and animal rights activists stood upon as we patrolled the waters off Neah Bay for months on end- and she was solid. She never wavered in her support for the whales and those who defended the whales. “Yes, my people once killed whales and yes the whale is important to us.” She once told me. “But now it’s time to repay the whales for what they gave to us in the past, now is the time to protect them, not to kill them. The whale was once the salvation of the Makah. We now need to be the salvation of the whale.” 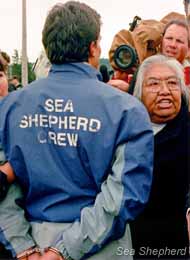 In the end, one whale died, a baby Gray that fell to the .50 caliber rifle of Wayne Johnson. The same man illegally killed another whale a decade later, a crime for which he was arrested and convicted. The final result of Alberta Thompson’s courageous stand was that the tradition of killing whales was not revived and the whales today have no fear of approaching the Makah community of Neah Bay.

Binky had saved her whales!

All of us who had the pleasure and the privilege of knowing her and working with her loved her dearly and thus we were saddened to hear that she died on April 11th, 2012 at the age of 88.

A Funeral will be held at 1:00 p.m. Monday, April 16, 2012 at The Neah Bay Assembly of God Church. Viewing will begin at Noon. Burial follows at Neah Bay Cemetery.

Neah Bay is not the easiest place in the world to reach so for those who would like to post a message of condolence please sign the guestbook at Drennan & Ford Funeral Home and Crematory in Port Angeles. Her family needs to know just how much Alberta did for the whales and that she has been recognized internationally for her courageous contribution to the successful effort of stopping the revival of whaling in the continental United States.

Please sign the online guestbook for her family here.