Medal for Courage Given to Hannah Mighall

Captain Paul Watson, in Hobart to refuel the Steve Irwin for the return to the Southern Ocean Whale Sanctuary was impressed.

"Surfing to me has always been more than just a sport," said Captain Watson. "It is almost a religious experience because it allows for an intuitive understanding of our relationship with the sea. At an early age, Hannah Mighall has experienced this, and this means she has the true soul of a surfer and her compassion for the shark that attacked her was not only courageous but revealed that she is truly is connected with the inter-connectiveness of life in our oceans."

"I only looked at my leg once and didn't want to look again. My leg was just like a bit of yellow meat and there was lots and lots of blood, it was pretty gross," said Hannah. "But it didn't take a big chunk out of me, just my board; I'm going to hang that in my bedroom.

9 days after the attack, Hannah said, "It's healed up really well. The stitches look like a jigsaw puzzle piece that's been put together. It looks pretty cool."

Sharks occasionally attack surfers because surfers on the surface look very much like seals or sea lions from below. Usually the shark lets the surfer go after the initial bite. Hannah and her parents came by the Steve Irwin at Princes dock on Tuesday, January 20th at the invitation of Captain Paul Watson and the crew.

"She weathered the attack with great courage and then she defended the shark with an even greater courage," said Captain Watson. "I admire her spirit. I told her that some Polynesians believe that to be bitten by a shark means that good fortune will be hers for the rest of her life."

Hannah intends to return to the surf when her leg heals. 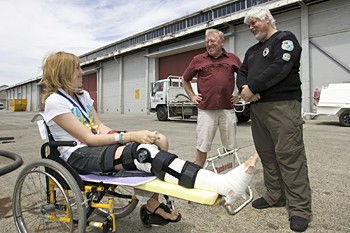