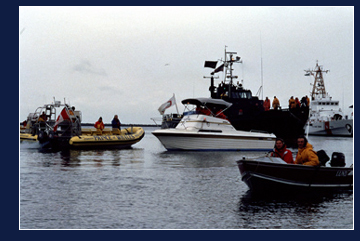 SEATTLE (Dec. 20) -- Today, the U.S. Court of Appeals for the Ninth Circuit effectively put a stop to the Makah tribes hunting of gray whales off the coast of Washington. The court reversed a previous trial court decision, and ruled, for the second time, that the government had failed to comply with the National Environmental Policy Act, and, for the first time, that the whale hunt violates the Marine Mammal Protection Act. The legal challenge had been filed by The Fund for Animals, The Humane Society of the United States, and other groups and individuals.

The plaintiffs argued that the government failed to adequately study the ways in which the Makah whale hunt could adversely affect the environment, especially because the expanded hunt posed an even greater risk to the areas small population of 30 to 50 resident gray whales. The plaintiffs also argued that the governments authorization of the whale hunt violated the Marine Mammal Protection Act, which expressly prohibits whaling, while creating an exemption for Alaskan tribes but not for the Makah...

Back in the summer of 1995, the Sea Shepherd Conservation Society launched the first campaign to oppose plans by the Makah Indian Tribe of Washington State to kill Gray whales.

In 1997, the Makah announced that they would take five whales a year for five years. The United States government supported this quota. The International Whaling Commission did not.

The National Marine Fisheries Service in Seattle was biased in favor of the Makah hunt from the beginning and NMFS deliberately ignored the requirements of the Environmental Impact Statement.

In 1998, we positioned two ships the Sea Shepherd III and the Sirenian at Neah Bay for two months to oppose the whaling.

No whales were killed in Neah Bay in 1998, and we returned again in May 1999, to actively oppose the killing. With the support of the United States Coast Guard, the Makah killed their whale - a two year old defenseless whale that Makah Elder Alberta Thompson named Yabis, the Makah word for Beloved.

The Sea Shepherd Conservation Society fought this whale hunt for seven years. We stood up for the whales on the water with our ships, and we represented the whales in court. Our efforts galvanized other groups and individuals into action and a strong coalition was created that finally achieved a major victory for the whales in December, 2002 with the decision by the United States Court of Appeals for the Ninth Circuit to order the shutting down of the Makah whale hunt.

All of our efforts have been vindicated. Our reason for opposing the whale hunt was that it was illegal under both international and United States law. We have been proven right and justice for the whales has prevailed.

The Appeals Court for the Ninth Circuit reversed a previous trial court decision, and ruled, for the second time, that the government had failed to comply with the National Environmental Policy Act, and it ruled for the first time, that the whale hunt violates the Marine Mammal Protection Act. 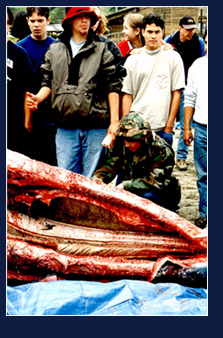 The Court also ruled that a treaty-based activity must conform to both the National Environmental Policy Act and the Marine Mammal Protection Act.

Back in 1998, the Sea Shepherd Conservation Society warned Indian Tribes that the consequences of the Makahs illegal activities could have a profound impact upon treaty rights overall. We urged Indian tribes to support the whales and to abide by the environmental and conservation laws because conservationists had no choice but to pursue justice for the whales through the legal system.

Our predictions have unfortunately come true. The decision of the Court of Appeals has protected the whales from the Makah but at the same time it has struck a devastating blow to treaty rights. Attorneys for the Tribes have stated publicly that this decision is a major setback for treaty rights.

The tribes may appeal this decision to the full 9th Circuit Appeal Court, or to the U.S. Supreme Court, a process that will take a few years. In the meantime the Environmental Impact Statement will be expensive and if completed will still not satisfy the issue pertaining to the violation of the Marine Mammal Protection Act.

The Seattle Post Intelligencer recently reported that Makah attorney John Arum was shocked at the decision. The articles also stated that this decision is the most important legal decision since the Bolt Decision 30 years ago that gave 50% of the Washington State salmon quota to the Indians.

The Sea Shepherd Conservation Society regrets the damage that the Makahs decision to whale has cost the United States Indian Tribes. However, we applaud the decision of the Appeal Court because our clients are the whales and this decision is the right decision both for the whales, and for upholding the Marine Mammal Protection Act.

After seven years of opposition to this illegal and cruel plan to slaughter whales, the decision marks a great victory for the whales.

A complete copy of the 54-page decision is available at
www.fund.org/uploads/ninthcircuit.pdf