On August 12th, Captain Paul Watson of Sea Shepherd and Andrew Butler, the Global Campaigns Director for LUSH Fresh Handmade Cosmetics launched a campaign to protect the sharks of the ocean.

From the Botanic Gardens in Sydney, Australia, Captain Watson and Andrew Butler explained to the Australian media in attendance that the campaign was being launched in Australia for the purpose of urging the government of the state of Queensland to not proceed with a proposal to open a dedicated shark fin fishery in the waters around and in the Great Barrier Reef, a world heritage site.

The decision by Queensland is expected in mid-September 2008.

"If we can't convince a nation like Australia of the importance of protecting sharks from this destructive fishery, we will have little hope of convincing poorer nations to refrain from slaughtering the world's sharks for the Chinese shark fin market," said Captain Paul Watson.

"Sharks have shaped evolution in our oceans for 450 million years," continued Captain Watson, "and their diminishment has already been the cause of severe damage to global oceanic eco-systems. Shark species extinctions will cause irreparable damage. If we can't save the sharks, we will fail to save our oceans, and if our oceans die, civilization and humanity will die. LUSH and Sea Shepherd recognize that we need to save the sharks if we are to save ourselves, and we are working together to make this happen."

The Queensland government has been attempting to keep the shark proposal as quiet as possible, so quiet in fact that they informed the media that there was no plans and no proposal to open a dedicated shark fishery despite the fact that the proposal has been on the government web site for months.

The Queensland Department of Primary Industries and Fisheries told the media bluntly that there are no plans to catch and process sharks on the Great Barrier Reef.

What this means is that the government of Queensland and Premier Annie Bligh will be in a very embarrassing position if they proceed to pass this proposal next month after publicly stating that there is no proposal or plan to open a shark fishery.

We intend to hold them to this although we suspect when the time comes, they will say that the statement made was from a bureaucrat who was misinformed.

The Lush and Sea Shepherd initiative is a global campaign.

"Lush is a campaigning company, and we have already tackled issues such as animal testing and over-packaging. But with 100 million sharks being killed every year and time fast running out for the remaining 10% of the global shark population, the campaign against shark finning and longlining is perhaps our biggest challenge yet," said Andrew Butler. 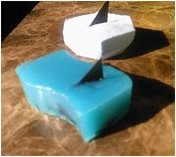 "Lush have over 550 stores in more than 50 countries, and we will be campaigning on this issue in all of them, but the nature of the global campaign very much depends on the decision made by the Queensland Department of Primary Industries and Fisheries in Australia next month. If it goes against the sharks we will know who the target of our campaign will be," said Butler.

LUSH will have window displays including Sea Shepherd and Shark Angel videos running in their stores beginning in September. LUSH has also created a new product called Sharkfin Soap with the profits from the sale going to finance Sea Shepherd anti-shark-finning campaigns.

The Sea Shepherd Conservation Society is the world's most active shark conservation organization. With full time anti-poaching patrols in the Galapagos National Park Marine Reserve and global efforts to confiscate and destroy illegal longlines, Sea Shepherd has saved hundreds of thousands of sharks and inflicted enormous economic damage on illegal shark finning operations including the confiscation of over 45,000 shark fins in Ecuador in 2007. Sea Shepherd also is featured in the commercially successful release of the film Sharkwater.

Sharkwater premiered in Perth, Australia on the evening of August 12th with over 550 people attending the benefit opening for Sea Shepherd sponsored by Sea Shepherd in Western Australia. 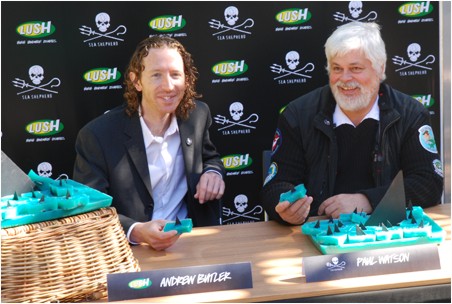