"Sea Shepherd will be presenting Alice Newstead with an award for courage for her incredible achievement in focusing public attention on the worldwide slaughter of sharks," said Captain Paul Watson, Founder and President of Sea Shepherd. "What she and LUSH have contributed to this conservation effort is enormous. The cruelty of the shark finning industry was brought intimately into focus with the piercing of Alice's flesh and the dripping of her blood down her back. LUSH, Sea Shepherd, and Alice are very much aware that if we drive sharks to extinction, we will destroy our oceans, and if we do that, civilization will collapse and humanity will disappear. What Alice did was not just for the saving of sharks, but for the salvation of humankind. Our admiration for her sacrifice is profound, and the scars that she will bear represent a rare courage demonstrating that we all must do what we can with the talents we possess to save our oceans."

Today's dramatic enactment of the gruesome manner in which sharks are caught kicks off the beginning of a global campaign between LUSH and Sea Shepherd. Each of LUSH's storefronts across the UK now hosts window displays featuring Sea Shepherd's jolly roger flag, LCD screens playing a continuous loop of Shark Angels footage, and other educational materials.

LUSH's staff are dressing as pirates and handing out Sea Shepherd shark brochures (PDF) in an attempt to educate consumers about the desperate plight of sharks. Among other things, LUSH is urging consumers to boycott restaurants that serve shark fin soup and health food stores that sell shark cartilage supplements. LUSH has also delivered letters to local restaurants and health food stores asking them to "wash their hands" of this barbaric industry and stop selling shark products.

To assist these businesses in "cleaning up their act," LUSH has created a new and cruelty-free product especially for this campaign, called Shark Fin Soap. The UK stores plan to sell a limited batch of 11,416 bars, with 100% of the proceeds going to Sea Shepherd. Why 11,416 bars? In recognition of the fact that a staggering 11,416 sharks are killed every hour, and that populations are being wiped out faster than they can reproduce. 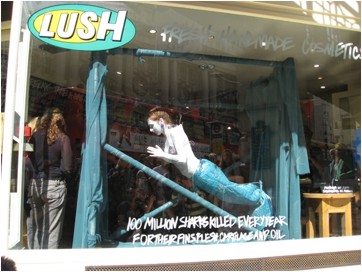 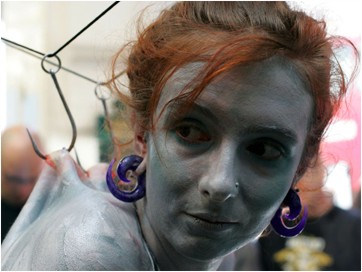 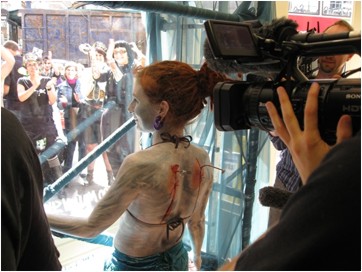 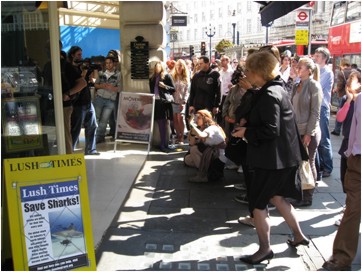