The report starts off with the historical background of sealing in the country and upon close reading, it is clear that Namibia points a finger at colonial “exploitation” for the onset of seal harvesting, but intimates that it is Namibia who should get credit for the state of regulated sealing as it stands today. It may be true that sealing has its origins in European and American trade, but “regulating” continued exploitation of living resources such as the Cape Fur Seal, is nothing to be proud of – especially if the resource is harvested in the most brutal manner possible.

After wading through legal jargon and contradictory rhetoric, Advocate Walters seems to base his main argument on the provision made by the Namibian Constitution for the sustainable utilization of the country’s natural resources. After all, if this point is successfully refuted, the whole issue of killing seals becomes null and void and these animals will be allowed to live out their lives in relative peace. 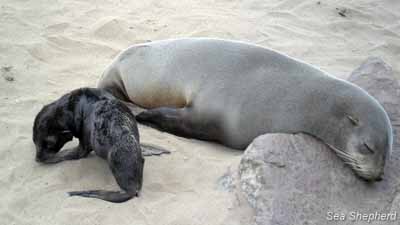 Walters blindly accepts that these animals are being killed sustainably, despite admitting that there is a lack of transparency from the Ministry of Marine Fisheries and Marine Resources (MFMR). It is extremely irresponsible and misinformed of him to say “seals are still with us and will be with us for a long time to come”. That in itself is could very well lead to Cape Fur seal populations being compromised. Far too many species have gone extinct in our time. At the rate these animals are being decimated, it will be no surprise if they join the endangered species list in the future.  So how can Advocate Walters allow the slaughter to continue if he is not certain beyond a reasonable doubt that current practices do not violate the principles of  their own constitution? Apparently, in the upper echelons of the Namibian judiciary, such lack of transparency is perfectly acceptable when reaching a solid, grounded conclusion.  Sadly, this is the kind of inconsistency that those fighting for the lives of Namibia’s seals have become accustomed to.

To summarize, this official government report is not worth dissecting.  Instead read the outstanding report “The Economics of Seal Hunting and Seal watching”, which shows Namibia can generate more revenue from living seals then slaughtered ones.

The people of Namibia deserve an investigator that doesn’t make a complete mockery of Namibia and it’s people. One who demands full transparency from parties involved so he can conclude that the Cape Fur Seal slaughter is illegal, barbaric, and a disgrace for the breathtaking wilderness of southern Africa.

After waiting so long for this drivel, it can be likened to eagerly opening up a present, expecting a bike but getting a pair of socks instead. The "gift" given to us by Advocate John Walters is useless and disappointing, and like an unwanted gift will gather dust in an obscure corner of cyberspace while we continue to wish for something better. Except, because lives are at stake and because we are Sea Shepherd, we will not sit idly by, we will be fighting for the lives of these animals. Until all seal culling activities cease and a moratorium is enacted Sea Shepherd continues to fight so the Cape Fur Seals can live unhindered on the beautiful Namibian coast.