Life Raft Discovered by the Crew of the Steve Irwin

Extreme weather conditions overnight have now abated and at 0800 hours, Sea Shepherd pilot American Chris Aultman, took off from the deck of the Steve Irwin to begin an aerial search of the area.

“We are hopeful that the crew may still be with the yacht or were able to make it to shore. We will do a complete search of the area in accordance to instructions provided by New Zealand Search and Rescue,” said Captain Watson.

It is now established that two of the five man Norwegian expeditionary team are alive, while the three presumably onboard the Berserk yacht remain missing. The two man exploration party was discovered about 100 miles inland bound for Ross Island. They said they were to meet the remaining crew of the Berserk at Shackleton’s Hut on Ross Island. The two Norwegians have indicated that they do not need assistance; they are now bound for McMurdo Station.

The Sea Shepherd ship Steve Irwin and the Nancy Burnet helicopter have completed a careful aerial and sea search of the McMurdo Sound, but they've been unable to find a trace of the Norwegian yacht Berserk. Sea Shepherd will continue moving northward in the direction of the wind and currents in their continued search for the missing yacht and crew. Search conditions are excellent in terms of visibility and sea conditions, with little wind. 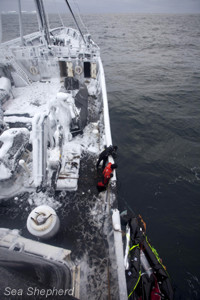