Letter to IFAW – Please Help Save the South African Seals

Letter to IFAW - Please Help Save the South African Seals 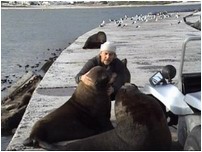 Sea Shepherd Conservation Society wholeheartedly supports the work of Francois Hugo of Seal Alert - SA. Thankfully, we are not alone in championing Francois' efforts. There are many other people and organizations who are banding together to try to get Seal Alert-SA the funds they so desperately need to help save the Cape fur seals.

One such organization, is the Marchig Animal Welfare Trust.  Les Ward, managing trustee of the Trust, has written a letter to the International Fund for Animal Welfare-South Africa to plea with them to invest funds in Seal Alert-SA's crucial efforts.  Please see the letter below, which ends with a list of people representing organization that have signed onto this letter.

If you are member of IFAW, we urge you to ask this well-funded organization to support this noble cause.

Letter to IFAW as follows:

I am writing to you on behalf of the Marchig Animal Welfare Trust, a respected international grant making charity based in the UK.  This request has the support of the other organisations and individuals shown at the bottom of this letter.

We have been made aware of the desperate need for a rehabilitation platform as well as help with the costs of rehabilitating seals by the organisation Seal Alert SA.  This Trust has helped this organisation over the years and is impressed by the dedication and work of Francois Hugo and his wife Nelda.

As IFAW will no doubt be aware by the end of October, some 6-weeks away, seal pups that have been washed off the rocks or become abandoned after their mothers have become yet more victims of the fishing industry, will begin stranding on the coastline of South Africa.  Within two months as many as 40,000 pups will have died after stranding along the coast.

Whilst Seal Alert SA cannot hope to rescue and save them all, with the right floating platform, equipment and sufficient medicines a number of these seals could be saved and granted a further chance at life.  At the moment, Seal Alerts two small floating rafts although very effective in seal rescue cannot hope to cope with the rehabilitation of so many seals needing help during the pupping season.

Therefore what is desperately needed is a larger floating platform that will be able to house all the rehabilitation equipment, is big enough to accommodate 50 to 100 seals and enable the carers to remain with the seals as long as is necessary.  Seal Alert SA believes that the solution lies in a Catamaran boat of about 24-foot. The lowest price of these scarce boats is around R120 000 or $18 000.  In addition, as these pups require constant attention for the first 90-days the rehabilitation costs amount to a minimum of about R7000 or $1000 each.

As you know IFAW is seen by vast numbers of the international public to be synonymous with the saving of seals.  It has raised millions of dollars over the years through its publicity materials asking for money to help save and protect seals.  Therefore we are approaching IFAW for a donation of between US$25,000 and US$30,000 towards the campaign to save and rehabilitate the seals, that includes the purchase of a catamaran desperately needed by Seal Alert SA and which as already outlined, will make a valuable practical solution to saving the lives of seals.  The Marchig Animal Welfare Trust is prepared to provide a complimentary grant to the donation provided by IFAW.

The on-going plight of the South African seals is again attracting much public concern and is beginning to receive considerable publicity, as is this campaign initiative on behalf of Seal Alert SA to raise the necessary funding to help these seals. I feel sure that the international public will be surprised and disappointed were IFAW not to financially support this campaign to rescue and save the seals from an otherwise certain death and especially as indicated earlier, IFAW's origins and foundation are firmly based on the seals issue.

Therefore your early attention to this request would be appreciated, since time is not on our side with the pupping season looming.  We look forward to receiving your positive reply.