Captain Paul Watson to Appear in Court in Canada

Captain Paul Watson will appear before a Federal magistrate in Vancouver, B.C., on
March 15, 2007, to have a bench warrant lifted. 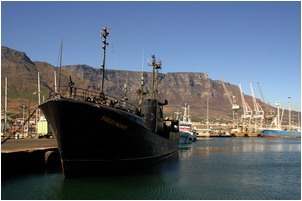 The warrant for Captain Watson's arrest was issued during the time that he was in Antarctica. The warrant is to answer charges that Captain Watson violated the Canada Shipping Act by escaping from Cape Town South Africa in a vessel that was no longer registered as a Canadian yacht.

"It really is a minor charge," said Captain Watson. "More like a traffic violation than a crime, but when the politicians are motivated they abuse the system to get what they want. The bottom line is that Canada was unhappy with our interventions against illegal Japanese whaling in the Antarctic in 2005 and 2006."

Of course, it is noteworthy to consider that Captain Watson has been ordered to appear in court on March 15th, the day of the worldwide protests against the annual Canadian seal slaughter thus preventing him from attending any of the demonstrations especially the big one to be held at Parliament Hill in Ottawa.

Last December, Captain Watson's acquittal on charges of breaking the Seal Protection Regulations by unlawfully approaching a sealer in the process of killing a seal was overturned and he was found guilty of the crime of witnessing a seal being slaughtered.

In Canada, it is illegal to witness or document the slaughter of a seal pup without a permit from the government of Canada, and the Canadian Department of Fisheries and Oceans (DFO) determines who is eligible for a permit. The DFO refused to issue permits to the Sea Shepherd crew in 2005.

Captain Watson has been fined $3,000 for witnessing a seal being killed and has been banned from the area where the seal hunt takes place for the next two years. If he returns to the seal slaughter in 2007 and 2008 he will be charged with criminal contempt. 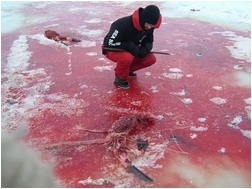 "The government is becoming draconian in their efforts to prevent people from witnessing or interfering with the slaughter of seals," said Captain Watson.

Twelve Sea Shepherd crew were arrested in 2005 for approaching a seal slaughter. All but Captain Watson were fined $1,000. Dr. Jerry Vlasak refused to pay the fine and opted to serve 20 days in prison where he conducted a hunger strike in protest of the seal hunt in 2006. The fines have not yet been paid pending an appeal by Sea Shepherd to overturn the convictions based on the fact that the arrests are a violation of the Canadian Charter of Rights and Freedoms.

The Sea Shepherd crew were assaulted on the ice in 2005 by sealers. Despite the assaults being documented and the assailants identified, the RCMP refused to lay charges on the grounds that the "protestors had provoked the violence with their presence."

Video Clip of Assault by Sealers