This case saw the Steve Irwin arrested in Scotland in July of 2011 and released only after the bond was posted. The bond was raised in only 10 days from Sea Shepherd supporters worldwide.

"What we did in 2010 we have no apologies for," Said Captain Paul Watson. "We freed 800 large endangered Bluefin tuna illegally caught by poachers off the coast of Libya. We cut the nets and when the Maltese company that claimed ownership of these liberated fish sued us, we stood our ground in court and we won, the tuna won, and the poachers lost. Our British lawyers did an excellent job. I am confident that if an appeal is granted, we will see the appeal court upholding this ruling. Bottom line and most importantly, the fish were freed and the company failed to recover their requested losses for their illegal catch." 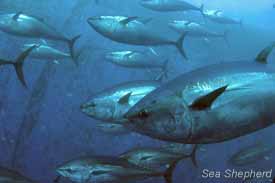