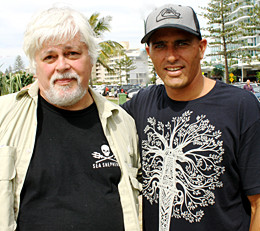 The deal includes a customized Quiksilver sponsored Sea Shepherd clothing line featuring a signature Kelly Slater board short. For every retail item sold, the industry giant will donate $5 to help support the efforts of the self-proclaimed, "Neptune's Navy."

Established in 1977, the Sea Shepherd Conservation Society (SSCS) is an international non-profit, marine wildlife conservation organization whose mission is to end the destruction of habitat and slaughter of wildlife in the world's oceans in order to conserve and protect ecosystems and species. Best known for their innovative direct-action tactics, Sea Shepherd investigates, document, and take action when necessary to expose and confront illegal activities on the high seas.

The endorsement by Slater of the often controversial activist group is a symbol of solidarity that sends a clear message to the global community that pro-surfers are becoming serious about taking direct action to protect the very arena in which they work and play.
"The time and commitment they've all put forth have put a huge dent into things we'd like to see not exist." -Kelly Slater

Local surfing film legend Dick Hoole commented, "Through the path of surfing, our generation has become more aware that the marine environment is something that we need to protect. Here in Australia, we went from killing whales to saving whales. After all, surfing teaches respect for nature."

"Kelly Slater understands that connection," added Watson. "He has said that the ocean has spoken to him as it has spoken to me and many others. He understands what it means to be a moanahepara-a shepherd of the sea."

The eradication of pirate whaling, poaching, shark finning, unlawful habitat destruction, and violations of established laws in the world's oceans all fall under the Sea Shepherd's rigorous mandate. The oceans are in grave danger and time has never been more critical for surfers to join forces with pioneers Kelly Slater and Quicksilver in supporting Captain Paul Watson and The Sea Shepherd's efforts to protect the homeland.

"It doesn't take a lot of people to make a change, but one intelligent person can make a difference," added Hoole. "Kelly Slater's thinking shows that not only is he a great surfer and athlete, but his consciousness is way ahead of people his age."