On Friday, April 24th, preparations on San Cristobal were completed and three of the teams were transported to this island. For the official acceptance, I went over to San Cristobal accompanied by Marcel Bigue, Project Developer Galapagos for fellow project sponsor, Wildaid.

San Cristobal is the island that houses the central government. It is also were the head of police and the navy are stationed and therefore of extreme importance for this project.

In the past month, Sea Shepherd has supervised the construction of kennels and made the required preparations for the arrival of the guides and dogs.

The head of police for Galapagos, Colonel Rocha, is very pleased with the arrival of the dogs to San Cristobal. He is well aware of the importance of this pilot project and has committed to giving his full support.

We are about to start construction of the kennels on the last of the three islands, Isabela. It is the most difficult of all islands involved, as this is where most of the poaching takes place.

The police will begin random controls throughout the islands in the coming weeks.

Sea Shepherd Galapagos is looking for additional sponsorship for this project to cover building expenses in Isabela and to acquire a fast launch to help the police get to remote poaching locations. 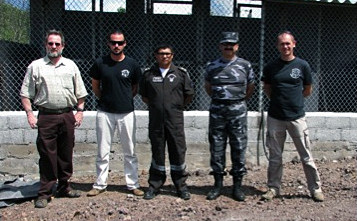