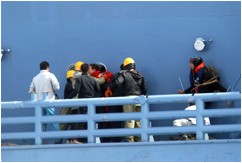 The Japanese harpoon vessel Yushin Maru No. 2 has taken two Sea Shepherd volunteer crew members hostage. Benjamin Potts 28, an Australian citizen and Giles Lane, 35, a citizen of Great Britain are being held hostage onboard the whaling vessel. Both men were assaulted and then tied to the railings of the whaler. They were then moved and tied to the radar mast by the whalers.

Both men boarded the Yushin Maru to deliver a message to the Japanese captain that the whalers were in violation of international conservation law by targeting endangered species in an established whale sanctuary in violation of a global moratorium on commercial whaling. They also notified the captain that Australia had just passed a court ruling barring Japanese whalers from the Australian Antarctic Economic Exclusion Zone.

All of this activity has taken place in the area of 60 Degrees South and 78 Degrees East. All activity has been documented from the Sea Shepherd helicopter and the fast moving Delta vessel. The Steve Irwin has dispatched a small fast Delta boat and a helicopter to attempt to persuade the Yushin Maru No. 2 to stop and release the hostages.

Captain Paul Watson has notified the Australian Federal Police that he would like to see kidnapping charges brought against the Japanese whalers. The Australian government and the British Embassy have been informed that their citizens are being held hostage on an illegally operated Japanese whaling ship in International waters.

The Japanese factory ship Nisshin Maru has fled over 700 miles to the Northwest and is heading towards South Africa accompanied by the Greenpeace ship Esperanza. The entire whaling fleet is on the run and outside of the whaling area with the Sea Shepherd ship Steve Irwin in hot pursuit of five vessels of the Japanese fleet.

No whales have been slaughtered for the last four days and it does not look as if the whaling operations are going to begin again for another week at least, and not at all if the vessels are prevented from regrouping. The Sea Shepherd ship Steve Irwin has a good supply of fuel and can remain in the area for some time and will continue to police the illegal whaling operations by the Japanese fleet.