Japanese Whaling Fleet Is On the Run

"It looks like Whale Wars, season #2 is officially underway," said Captain Paul Watson. "We've got them on the run. They are not in the Ross Sea where they said they would be. They are in Australian waters. The Sea Shepherd Conservation Society is officially calling on Australian Environment Minister Peter Garrett and Foreign Minister Stephen Smith to order the Japanese fleet to comply with the orders of the Australian Federal Court and to cease and desist from killing to whales in Australian waters." 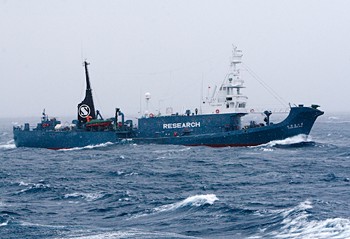 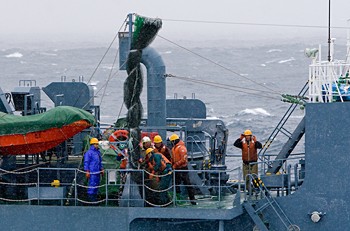 Crew members aboard the Japanese harpoon whaling vessel the
Yushin Maru No. 2 prepare to deploy a net speculated to act as a
deterrent to potential boarders from Sea Shepherd's
M/V Steve Irwin Photo by Adam Lau/Sea Shepherd