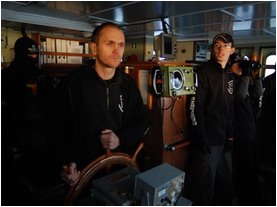 The Nisshin Maru is the factory ship of the fleet. The kill ships bring the dead whales back to this factory vessel and transfer them to the 130m long processing ship where the whales are butchered and stored. The Japanese whaling fleet plans to illegally slaughter over 900 whales in the Antarctic Whale Sanctuary this year - including 935 piked (Minke) whales and 10 fin whales. In hot pursuit: Captain Alex Cornelissen and First  Mate Peter Hammarstedt
on the bridge of the Robert Hunter

This Japanese whaling operation is in violation of many international laws and regulations, including:

The Sea Shepherd flagship Farley Mowat is also closing in on the fleet and moving towards their position. The Robert Hunter, can easily outrun the Nisshin Maru. The Nisshin Maru was forced to stop its whaling activity and is now attempting to flee the area and both Sea Shepherd ships are now in full pursuit and closing in on the illegal whaling vessels of the Japanese whale killing fleet. Photos are now available. 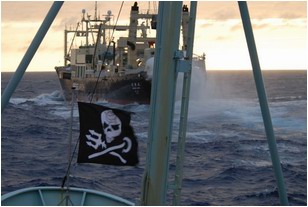 The objectives of the Sea Shepherd vessels are to enforce international conservation law against illegal Japanese whaling operations in accordance with the principles established by the United Nations World Charter for Nature.

To read the next update on the ship's activity, click here.