"Let us kill the Piked and Fin whales or the Humpbacks will die," is the message from Joji Morishita of the Japanese Institute for Cetacean Research.

Once again the Japanese whalers are threatening to slaughter Humpbacks unless they get permission to slaughter a thousand Piked whales and fifty endangered Fin whales in the Southern Ocean Whale Sanctuary in December of 2008 and January thru March 2009.

"Japan is willing to work with the current chair of the International Whaling Commission by suspending its Humpback hunt if there are signs of progress at the IWC," said Japan's chief whaling negotiator Morishita.
"The final decision will be made at the last moment, I guess. But ... the IWC process is moving so I assume that the same situation will apply to the coming research season," he told a press conference.

The current chair of the IWC, William Hogarth of the United States, has reportedly urged Japan to spare the Humpbacks for another year to avoid driving a wedge into an already divided commission.

The 81-nation IWC agreed at its annual meeting last week in Santiago to create a 24-nation working group to recommend solutions ahead of next year's meeting in Portugal's Madeira island.

The Santiago meeting of the IWC accomplished very little this year. Japan was able to manipulate the agenda to avoid any serious voting on the real issues. Illegal Japanese whaling in the Southern Whale Sanctuary in violation of the global moratorium on whaling was not even discussed. Instead Japan pushed the agenda that the IWC should direct its energies towards stopping the activities of the Sea Shepherd Conservation Society.

As long as the IWC refuses to acknowledge the illegal activities of Japanese, Norwegian and Icelandic whaling, no progress will be made in conserving the world's whales.

The Sea Shepherd Conservation Society has the ability to shut down illegal Japanese whaling activities in the Southern Ocean Whale Sanctuary. The laws are clear, the situation is clear; all that is needed is enforcement. Sea Shepherd can supply that enforcement.

Sea Shepherd's Operation Musashi intends to sink the Japanese whaling fleet economically next season. The illegal Japanese whalers are the problem and Sea Shepherd ships and crew are the solution.

The 2008/2009 campaign promises to be the most confrontational and dangerous campaign to date. The stakes are high, the risks are high and the rewards are priceless - the saving of the lives of hundreds of endangered species. 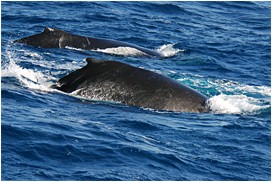 Humpbacks in the Southern Oceans