Japanese Whalers Shut Down By Their Own Folly

Japanese Whalers Shut Down By Their Own Folly

The Nisshin Maru is not a very safe ship. Around ten years ago, while enroute to the coast of Antarctica, the vessel suffered a major fire that forced the whale slaughter ship into a South Pacific island port for repairs.

Now it has happened again.

The Nisshin Maru, the death star of whale kind, the floating slaughterhouse and ruthless killing machine, is now burning out of control in the Ross Sea.

One hundred and twenty-seven crewmembers have been evacuated to the other ships in the whaling fleet. Twenty crew remain onboard to fight the fire. Ships in the region have been notified to head towards the stricken vessel. 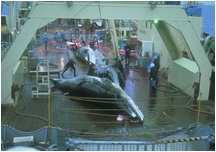 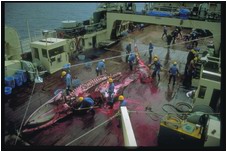 The Nisshin Maru at work

The Sea Shepherd ships Farley Mowat and Robert Hunter are 1100 miles to the northwest on course for Melbourne, Australia. The Robert Hunter is required to be in Melbourne by February 19th, the day the British have ordered the removal of the ship's registration at the request of the Japanese government. The Farley Mowat has only enough fuel left to reach Melbourne.

The Greenpeace ship Esperanza is 700 miles from the position of the Nisshin Maru.

The Japanese fleet changed their plans and instead of continuing westward, they doubled back to the Ross Sea. The fire began onboard the ship near the Possession Islands.

Sea Shepherd presumes that the Japanese fleet headed southward to shake off Sea Shepherd's pursuit. By heading south they knew it would extend the range between the Sea Shepherd ships and the nearest port, and they knew we would be having concerns about limited fuel

The crews of the Sea Shepherd ships Farley Mowat and Robert Hunter hope that all of the Japanese crew are safely evacuated.

The crews of the Sea Shepherd ships are relieved to know, however, that the killing of whales will most likely be halted for this year and if the damage is significant it may affect the whaling industries plans to return to the Southern Oceans at the end of the year to target endangered humpback, fin, and piked whales.

"Of course we are concerned for the welfare of the crew on the Nisshin Maru," said Sea Shepherd Founder and President Captain Paul Watson. "However we are down here because of our concern for the welfare and fate of defenseless whales. These highly intelligent, socially-complex sentient beings are now safe for the rest of this season from the merciless harpoons of the Japanese outlaw whalers and that is a good thing - a very good thing - and we are pleased for that."