Japanese Whalers Shoot Themselves in the Face with Pepper Spray

The video clearly shows three Japanese crewmembers on the deck of the Shonan Maru 2. Two of the crew are wearing metal tanks on their backs with nozzles in their hands looking just like the ghost busters. A third crewmember is standing by. The video shows the two crew with the tanks aiming their nozzles at the Sea Shepherd crew in an inflatable boat. The nozzles send out a blast of pepper spray towards the Sea Shepherd crew and the camera. However the wind was not in favor of this Japanese tactic and the pepper spray is blown back into the faces of the three crew, who can be clearly seen rubbing their eyes. They appear to be suffering irritation to their eyes.

The Sea Shepherd Conservation Society will be posting video footage as proof that the media release by the ICR was a lie and an attempt to accuse Sea Shepherd of injuring Japanese crewmembers.

The Sea Shepherd Conservation Society has never caused a single injury to any person since the organization was founded in 1977.

“I think this video absolves Sea Shepherd of any wrong-doing and demonstrates that the Japanese whalers routinely spin their stories to demonize our efforts to defend the whales from their illegal activities,” said Captain Paul Watson.

The Sea Shepherd ships Bob Barker and Steve Irwin have had the Japanese whaling fleet on the run for eight days without a single whale being killed. The Nisshin Maru is continuing to head westward and the fleet and the Sea Shepherd ships are now 2000 miles south of South Africa. 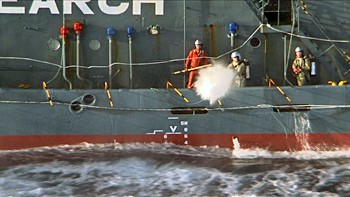