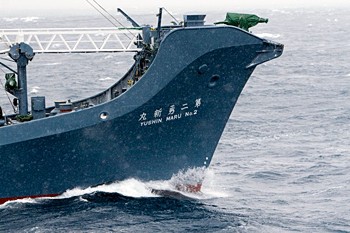 The Sea Shepherd crew also filmed and photographed the Yushin Maru #2 in January 2008 with the harpoon clearly seen. 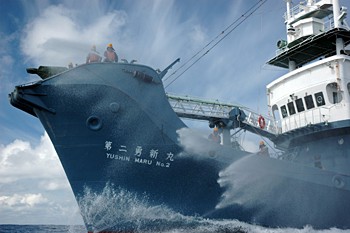 The Japanese harpoon whaling vessel the Yushin Maru No. 2
showing a harpoon on the bow, January 15, 2008

This was also the same ship that two Sea Shepherd crew boarded to deliver a message that the whaling fleet was in violation of an Australian Federal Court order prohibiting whaling in the waters of the Australian Antarctic Territory.

The Sea Shepherd Conservation Society is requesting that the government of Australia provide information to the government of Indonesia to confirm that Japanese whaling vessels cannot use Australian ports for refueling and repairs. In the meantime, Indonesian officials might ask the Captain of the Yushin Maru #2 why he voyaged some 3,000 miles to Surabaya when he could have had closer access to the ports of Hobart, Adelaide or Fremantle.

The Sea Shepherd Conservation Society is working with Jakarta Animal Aid and Earth Island Institute to delay any repairs to the Yushin Maru #2 and to communicate with Indonesian officials on the illegal activities of this outlaw whaler presently in the port of Surabaya.